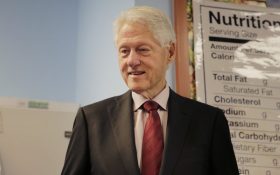 Former President Bill Clinton was admitted to a Southern California hospital Tuesday with an infection but he is “on the mend,” his spokesman said Thursday.

Clinton, 75, was admitted to the University of California Irvine Medical Center on Tuesday evening for a non-COVID-related infection, Angel Ureña said in a statement.

CNN reported on Thursday that Clinton had been hospitalized for sepsis. The outlet said that Clinton was suffering from a urinary tract infection, which eventually spread to his bloodstream.

In another statement, Ureña quoted Clinton’s primary care physician and the chairman of the hospital.

“He was admitted to the ICU for close monitoring and administered IV antibiotics and fluids. He remains at the hospital for continuous monitoring. After two days of treatment, his white blood cell count is trending down and he is responding to antibiotics well.” the doctors said in the statement. “… We hope to have him go home soon.”

They added that Clinton had gone to the ICU for security reasons, not for intensive care.

“He is on the mend, in good spirits, and is incredibly thankful to the doctors, nurses, and staff providing him with excellent care,” Ureña said.

The former president has faced health scares since leaving office. In 2004, he underwent quadruple bypass surgery after experiencing prolonged chest pains and shortness of breath. He returned to the hospital for surgery for a partially collapsed lung in 2005, and in 2010 had a pair of stents implanted in a coronary artery.

He responded by embracing a largely vegan diet that saw him lose weight and report improved health.

Ureña said that the California-based doctors were in touch with Clinton’s cardiologist. However, the doctors told CNN that Clinton’s hospitalization is not related to his heart condition.

The doctors stressed that urologic infections are common in older people and that they can be treated. However, they also warned that the infections become more serious as they spread to the bloodstream.

Clinton was in California for private events related to the Clinton Foundation, a foundation spokesman told The Associated Press.

Clinton’s doctors told CNN that his vital signs are stable. The doctors plan to switch Clinton from intravenous antibiotics to oral antibiotics by Friday.

Statement, from me, on President Clinton pic.twitter.com/Jbfl4evpcF