Hillary Clinton's holiday was RUINED by these 12 words... - The Horn News 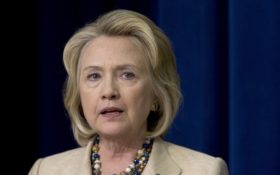 Former President Bill Clinton took to Facebook on President’s Day to defend his controversial Clinton Foundation from it’s numerous critics — including The Washington Post, which called for a federal investigation in the alleged pay-to-play scheme in Nov. 2017.

Clinton cited left-leaning sites like Politifact to attack those critical of the foundation’s work. It took just 12 words to push his claims right back into his and former Secretary of State Hillary Clinton’s faces… and it included an icy reminder that likely ruined their President’s Day holiday.

The Clintons tried to use social media to complain that the media’s coverage of their controversial organization wasn’t as biased as they wanted.

“These attacks on the Foundation began in earnest with the 2015 publication of the Breitbart-inspired book, Clinton Cash,” Clinton wrote. “I thought the Foundation staff did a good job debunking the book’s charges, but they were published as written even in ‘mainstream’ outlets, and even now the charges continue to be repeated online and in forums favorable to those who make them.”

Hillary also jumped in on Twitter, sharing Bill’s write-up and claiming it was the “real story.”

Want to hear the real story of the @ClintonFdn? Read this: https://t.co/30urSAvhnm

The FBI launched an investigation into the alleged pay-to-play Clinton Foundation six weeks ago — and word from friendly insiders may have gotten back to the Clintons that the investigation has uncovered illegal activities.

We already know the real story….that's why your foundation is being investigated

How about when Kuwait, Qatar, Saudi Arabia and Oman donated MILLIONS to your foundation when you were Secretary of State and then you conducted official US business with them?

Lest we forget Moscow paying MILLIONS to your foundation and Bill personally so you could sign over 20% of our uranium to them. Talk about Russian collusion, you utterly corrupt hack job!

Talk about a spoiled President’s Day…

Do you believe Bill and Hillary Clinton are honest?