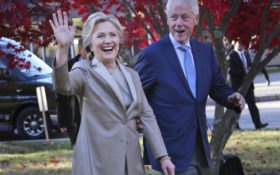 Bill and Hillary Clinton think their crooked political dynasty deserves to live in the spotlight, but the lights are going down one more time.

In a desperate cry for sympathy, Broadway rolled out a play about Bill and Hillary Clinton earlier this year.

The power couple thought fiction might put a shine on their stained image.

But the play was as big a flop as Hillary’s doomed presidential campaigns.

The show will close a whole month early, thanks to “underwhelming ticket sales.”

The production, called “Hillary and Clinton,” was originally produced just before the 2016 election…and it was supposed to show Hillary roaring back from defeat to conquer the Democratic Party (and, soon, the White House).

But Donald Trump flipped the script.

So, the play was rewritten and staged just as Hillary lost the 2008 Democratic nomination to Barack Obama – and now it’s coming to an embarrassing end.

The play’s producer, Scott Rudin, said the play is “a deep dive into a pivotal moment we think we know a lot about, but that in fact we actually know very little about”—but, as it turns out, it’s a moment we don’t care very much about, either.

The 90-minute skit cost Rudin and his backers $4.2 million to produce, so they kept it onstage just long enough to squeeze out a tiny, tiny profit.

The curtain comes down for the last time this Sunday after 77 performances.

The final performance takes the stage June 23—but the Clinton biography was supposed to run until at least July 21.

The Big Apple’s rejection shook Bill and Hillary Clinton to their core.

They thought New York liberals couldn’t wait to celebrate the woman they think got cheated out of the presidency—but no one wanted to sit through their boring life story.

The Broadway bomb is the final humiliation for Crooked Hillary. When an audience as liberal as Broadway turns its back on Hillary Clinton, it’s all over.

Since Hillary lost the 2016 presidential election, she’s done everything she can to stay in the public eye—from releasing a poor-selling book to coming up with dozens of reasons why she blew an election that she should have had in the bag.

A few years ago, she was New York’s U.S. senator. Now, she can’t get arrested.

The play, which written by Lucas Hnath, didn’t exactly help.

He made the strange decision to set it in an almost alternate universe—so instead of pantsuits, this version of Hillary wore turtlenecks and Bill Clinton didn’t have a Southern drawl.

Critics say Metcalf and Lithgow give great performances, but even they couldn’t save this stinker.

A review in the Bible of the left-wing entertainment industry, Variety magazine, said the play “has brought nothing of substance to the table.”

The script let Metcalf and Lithgow had fun in their roles, the review said, “But what about us? Where’s our fun?”

Hnath’s play “misses every opportunity” and ends in “disappointment,” according to The Wall Street Journal.

The real problem is that the Clintons aren’t any more likable in the play than they are in real life.

The script shows Bill exactly as he is: a self-centered, undisciplined, one-man wrecking crew.

Even in the play, Crooked Hillary comes off as whiny and entitled.

“I’ve been campaigning for close to a year now,” her character says. “I haven’t slept. I’m tired. I’m very tired.”

It’s too bad the play didn’t compare Hillary’s sleepwalking campaign in 2016 with Donald Trump’s dynamic energy, nonstop speaking schedule, and packed rallies that set electricity through tens of thousands of people at a time.

But the ultra-leftist entertainment industry has learned nothing and keeps trying to shove the Clintons down America’s throat.

After the Obamas inked a $50 million deal with Netflix, Hillary Clinton got a plum spot as “executive producer” with Steven Spielberg for a Netflix show on women in politics.

But look at the clues: Her book was a bust, her play shut down, and her national speaking tour was a complete disaster.

America wishes it could grab the stage hook and pull the Clintons off the national stage…and the day may be coming.

With Attorney General William Barr investigating the phony Russia dossier that Hillary Clinton’s campaign paid for, and the Deep State made the centerpiece of its plot to overturn the 2016 election which Hillary lost, how long can it be before the curtain finally falls on the Clinton family for good?