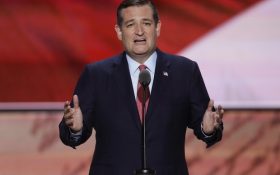 “If you killed Ted Cruz on the floor of the Senate, and the trial was in the Senate, nobody would convict you.”

Cruz has made a career out of being one of the most underhanded and hated men in politics. He’s universally despised in the Senate – and not just by his colleagues on the Democratic side of the aisle.

During his address at last night’s Republican National Convention, Cruz once again proved why. He cemented his legacy as a bottom-feeder – a belly-crawling snake without equal.

GOP nominee Donald Trump’s biggest mistake during this 2016 election season may have been allowing Cruz to speak at the RNC – a concession to a Republican Party calling for unity.

And while Trump acted with class and took the high road, Cruz did what he does best. He stabbed Trump in the back.

Cruz was met with loud boos (and a near-riot) for failing to endorse Trump, or to really mention him by name. And he told Republicans to simply vote their conscience, which was a clear nod to some of the language used by the “Dump Trump” movement.

In other words, Cruz stood before the Republican convention and told Republicans they don’t have to back their nominee if they don’t want to.

Trump, of course, has tried to brush off the cheap, underhanded nature of Cruz’s speech. But New Jersey Governor Chris Christie said it best, calling Cruz’s remarks “awful” and “selfish.”

And, in fact, this wasn’t some principled stand Cruz took. He’s proven repeatedly that he couldn’t find “principle” in the dictionary, even if you told him it was between “narcissist” and “smug.”

Instead, it was the latest example of the slimy, undignified manner with which Cruz has conducted his entire 2016 run. In case you’ve forgotten, here are some of his low-lights.

Cruz’s vanity has him obsessed with reaching the White House, no matter what he has to burn down in the process.

But all that hair gel Cruz uses must be seeping into his brain. Because Cruz will never be president. Not in 2020… not in 2024… not in some alternate universe… not ever.

The hard truth is, most voters don’t like Cruz any more than his colleagues do.

Cruz finished second in the GOP primaries in the same way that a team that gets swept in the World Series or blown out in the Super Bowl technically finishes second.

He was trounced by a newcomer with no political experience. It wasn’t even close.

Ted Cruz lost in nearly 40 states (not including overseas territories). That’s a fact.

He received literally HALF as many primary votes as Trump. And some of those votes were simply anti-Trump votes, as Cruz benefited from being one of the last candidates standing. That, too, is a fact.

And the 559 delegates he managed to scrape together is no badge of honor, nor a prelude to greatness. Keep in mind that in state after state, Republican voters decided they’d rather nominate a candidate who’d never held political office than take the chance of Cruz ending up in the White House.

The notion that Cruz is held in any great esteem by typical Republican voters is a fairy tale Cruz has deluded himself into believing… one that’s completely unsupported by the numbers.

And it’s highly unlikely that these voters gained any more respect for Cruz on Wednesday night. Some members of his Texas delegation admitted they were disgusted, and Cruz reportedly had to be physically separated from RNC officials. He was also apparently barred from a post-convention gathering by major GOP donor Sheldon Adelson.

We didn’t learn anything new about Ted Cruz last night. We just witnessed what we already knew.

Because when Cruz was extended an olive branch… one he didn’t deserve… he proved once again exactly what he is.

He’s a petty man who cares only about his own, personal advancement. And he’s still the biggest snake in politics.

What do you think? Comment with your thoughts on Cruz below.

— Kevin Hart is Publisher of The Horn News