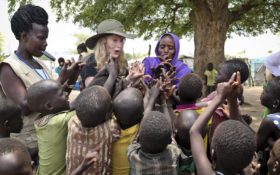 Mia Farrow will never forget the day she watched a baby die in her mother’s arms.

“It was a little girl staring at her mother and finally she just stopped breathing. I just moved away and listened to the mother’s cry,” the actress and human rights activist told The Associated Press in South Sudan’s capital, Juba, earlier this month.

She recalled the death as she visited the country again in her new role as envoy for the International Rescue Committee, helping the aid group to promote a global initiative to change the way humanitarian organizations approach malnutrition.

Farrow, who has worked as a UNICEF goodwill ambassador, has spent two decades traveling the world and advocating for human rights, especially for women and children.

Crouching in a displacement camp in Juba earlier this month, she jotted notes while listening intently to women express fears about being sexually assaulted and not having adequate shelter for families during the upcoming rainy season.

“I don’t know many people who could endure what they’re enduring,” Farrow said.

As South Sudan emerges from five years of civil war that killed almost 400,000 people, some 1.5 million people are on the brink starvation, the United Nations and South Sudan’s government said earlier this year.

“What we’ve seen on the ground, despite everybody’s best efforts, we’re not able to save as many lives as we could,” Mesfin said. With the current approach 50 million children around the world are acutely malnourished and approximately 80% aren’t receiving the treatment they need, he said.

The group proposes treating moderate and severe acute malnutrition as one condition, using a single high-calorie therapeutic food instead of two and delivering aid to families in their homes via trained community health workers rather than making people seek care at a clinic. That can mean walking for days in search of help, Mesfin said.

For the approach to be adopted the U.N needs to agree. The world body remains skeptical.

“There are still a lot of evidence gaps,” Lauren Landis, director of nutrition for the U.N. World Food Program, told the AP. The U.N. wants to be sure the treatment is fully tested and works in a wide range of settings, she said.

Both WFP and the U.N. children’s agency are supporting similar pilot programs, in a few cases partnering with the International Rescue Committee, looking at how to simplify the detection and treatment of malnutrition.

While sending trained community health workers into remote areas is one way of reaching more people, organizations need to weigh the risks and the benefits, one expert said.

“There are a lot of problems with quality, control, monitoring and accountability,” said Sarah Vuylsteke, former deputy head of access in South Sudan. The end goal should remain that everyone is able to access clinics and health care freely, she said.

Having seen the country before and after civil war, Farrow has a clear message for South Sudan’s government as it tries to implement a fragile peace deal signed in September.

“Just stop fighting … and find a way to peace,” she said. “Peace is the door out of this misery.”

Civilians continue to bear the effects of years of fighting.

In a recent visit to the town of Aweil in Northern Bahr el Ghazal state, the AP saw dozens of hungry children swarm large pots of grains during a feeding program.

The program is part of a new initiative launched by UNICEF and WFP with the aim of providing daily meals to 75,000 children at schools across the country.

One of the children, 10-year old Malong Garang Deng, hung his head.

Without school feedings he only eats once a day and sometimes there is nothing at all, he said.

He lifted a frail arm, trying to flex a muscle.