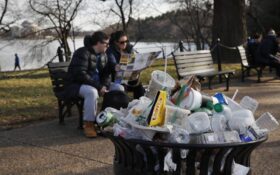 The Interior Department said Wednesday it will phase out sales of plastic water bottles and other single-use products at national parks and on other public lands over the next decade, targeting a major source of U.S. pollution.

An order issued by Interior Secretary Deb Haaland calls for the department to reduce the purchase, sale and distribution of single-use plastic products and packaging on 480 million acres of federally managed lands, with a goal of phasing out the products by 2032. The order directs the department to identify alternatives to single-use plastics, such as compostable or biodegradable materials or 100% recycled materials.

“As the steward of the nation’s public lands, including national parks and national wildlife refuges, and as the agency responsible for the conservation and management of fish, wildlife, plants and their habitats,″ the Interior Department is “uniquely positioned to do better for our Earth,” Haaland said in a statement.

The order essentially reverses a 2017 Trump administration policy that prevented national parks from banning plastic water bottle sales. Only a fraction of the more than 400 national parks, but some of the most popular ones like the Grand Canyon, had implemented such a ban.

Environmental groups hailed the Biden administration’s announcement, which advocates and some Democratic lawmakers have been urging for years.

“Our national parks, by definition, are protected areas — ones that Americans have loved for their natural beauty and history for over a century — and yet we have failed to protect them from plastic for far too long,″ said Christy Leavitt, plastics campaign director for the conservation group Oceana.

Haaland’s order “will curb millions of pounds of unnecessary disposable plastic in our national parks and other public lands, where it can end up polluting these special areas,″ Leavitt said. The group urged Interior to move swiftly to carry out changes in reducing single-use plastics.

Oceana said a national poll conducted by Ipsos in November 2021 found that more than 80% of American voters would support a decision by the National Park Service to stop selling and distributing single-use plastics at national parks.

Haaland said the plastics order was especially important because less than 10% of plastics ever produced have been recycled, and U.S. recycling rates are falling as China and other countries have stopped accepting U.S. waste.

Interior-managed lands generated nearly 80,000 tons of municipal solid waste in fiscal year 2020, the department said, much of it plastics.