BIG changes are coming to immigration (wow!) - The Horn News 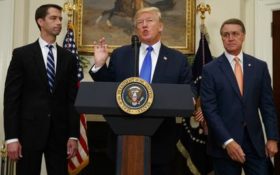 There are big things coming to immigration — and moving forward, the United States will screen foreigners on a merit-based policy.

President Donald Trump on Wednesday embraced legislation from two Republican senators that would place new limits on legal immigration and seek to create an system based more on skills and their value to the United States economy than on family ties.

Trump joined with Sens. David Perdue of Georgia and Tom Cotton of Arkansas to trumpet the bill. The president said if approved the measure would represent “the most significant reform to our immigration system in half a century.”

The president has made cracking down on illegal immigration a hallmark of his administration and has tried to slash federal grants for cities that refuse to comply with federal efforts to detain and deport those living in the country illegally.

But he has also vowed to make changes to the legal immigration system, arguing that immigrants compete with Americans for much-needed jobs and drive wages down.

Trump’s public support of the bill puts him at the center of efforts to make changes to the legal immigration system, with a focus on a skills-based system that the bill’s supporters say would make the U.S. more competitive, raise wages and create jobs.

Perdue and Cotton introduced the legislation in February. It would change the 1965 law to reduce the number of legal immigrants, limiting the number of people able to obtain green cards to join families already in the United States.

The bill would also aim to slash the number of refugees in half and eliminate a program that provides visas to countries with low rates of immigration.

The White House said that only 1 in 15 immigrants comes to the U.S. because of their skills, and the current system fails to place a priority on highly skilled immigrants.

But the Senate has largely ignored the measure, with no other lawmaker signing on as a co-sponsor. Previously, establishment Republican leaders have showed no inclination to vote on immigration this year.

Trump said the bill would create a new points-based system for applicants seeking to become legal permanent residents, or green card holders, favoring those who can speak English, financially support themselves and offer skills that would contribute to the U.S. economy. A little more than 1 million green cards were issued in 2015.

In a nod to his outreach to blue-collar workers during the campaign, Trump said the measure would prevent new immigrants from collecting welfare and help U.S. workers by reducing the number of unskilled laborers entering the U.S.

Sponsored: What Obama REALLY did on January 19th (unbelievable!)

“This legislation demonstrates our compassion for struggling American families who deserve an immigration system that puts their needs first and puts America first,” Trump said during an event in the White House’s Roosevelt Room.

During a much-hyped speech last August in Phoenix, Trump talked tough on illegal immigration – warning that “no one” who entered the country illegally would be safe from deportation.

He also vowed to reform the legal immigration system “to serve the best interests of America and its workers.”