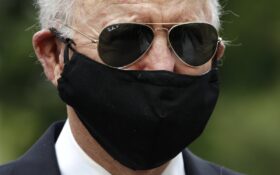 Political experts said that Democratic presidential nominee Joe Biden and his campaign were brought back from the dead by black voters in the South Carolina primary.

Now experts agree on one thing: To win 2020 he must choose a black woman to be his vice presidential pick.

And insiders are now saying two darkhorse candidates have emerged in the Biden running mate sweepstakes.

Atlanta Mayor Keisha Lance Bottoms and Florida Rep. Val Demings have skyrocketed to the top of the VP list, experts are saying.

Politico reported that both Bottoms and Demings have caught the eye of Biden and his selection team, and the two are being vetted amid the chaos engulfing the country.

According to advisers close to Biden, the unrest in America has changed his running mate selection strategy.

Sen. Carol Moseley Braun, D-Ill., a Biden surrogate, said “the only way he’s going to get the voters energized is to have a black woman candidate — a black woman — for vice president.”

“The time for the old playbook of getting geographic balance on the ticket has gone out the window with Sarah Palin,” she added.

Politico writes that the two emerging choices present options for the Biden team.

Bottoms has become a political media celebrity of sorts, praised for her leadership during both the Wuhan virus outbreak and the nationwide protests. According to Politico, Bottoms has seen a rise in TV bookings due to her booming mainstream media popularity.

The height of her fame may have come when she directly spoke to rioters terrorizing her city, one of the few liberal politicians to condemn the senseless violence.

“Go home!” she told them at a recent press conference.

On the other hand, Biden has an option in Rep. Demings who has served as a police chief and who is also married to a former sheriff.

Politico writes that Demings’ time as a police officer has been largely unblemished — under Demings’ command her unit had a clean record free of police brutality incidents. She has even been praised by Republicans for her leadership ability.

Insiders say she’s the clear choice for Biden to help capture the critical swing-state of Florida.

But insiders also worry that choosing Demings could enrage the liberal mob.

Many hyper-progressive liberals have declared war on police across America — and if the already-gaffe-prone Biden rocks the boat too heavily it could result in a disappointing turnout come election day.

Remember what happened in 2016?