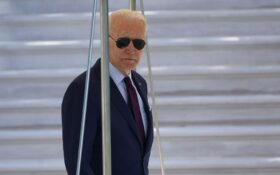 It’s official: Joe Biden is the Grinch Who Stole Christmas.

When Santa loads up his sleigh to deliver the toys, jewelry, and other gifts that your family has their heart set on unwrapping under the tree this year, most of them very well may be stuck on a train or a cargo ship.

The nation’s supply chain—the network of people who build, load, truck, ship, unload, stock, and sell the products in between the factory and your pantry—is backed up with enormous delays and disconnects that keep you from buying from what you want.

Ships are sitting in the Pacific Ocean port outside Los Angeles with no way to unload their cargo.

Trains full of boxes are stuck in the railway stations.

It’s a huge political problem for Joe Biden—and he knows it.

He envisions millions of potential voters spending $5 a gallon to fill up their cars—and drive to an empty store, then have their kids come down the stairs Christmas morning to an empty tree.

Joe Biden went out, looked at the backup, put all his brainpower into it, and said in the most obvious way possible, “All of these goods won’t move by themselves.”

Then, during his speech earlier this week, he started outlining his “solution”: He’d have the Port of Los Angeles work 24 hours a day, 7 days a week, to unload the backup.

He said the International Longshore and Warehouse Union—“the Longshoremen” for short—will work extra shifts to unload the containers.

“Today’s announcement has the potential to be a game changer,” Biden told everybody watching him.

What do people inside the industry—people with actual experience, and a clue about how these things really work—have to say about all this?

In other words, either Biden can get on the ball, or Santa’s going to be hauling an empty sleigh, come December.

First of all, the Port at Long Beach, California, announced that it would start 24/7 operations in September… but it turned out, that was just their date to start planning the 24/7 unloading.

“The Port of Long Beach is drawing up a pilot program for drayage trucks to retrieve and return containers at night, while the Port of Los Angeles is coordinating a weekend gate program, dubbed Accelerate Cargo LA, that will operate on a trial basis,” the statement read.

Once the cargo is unloaded, where is it going to go? All the distribution centers—the places those huge shipping crates go—are closed at night.

“Truckers and customers don’t want to pull boxes at night, because few DCs operate 24-hours a day,” said Grossgart. “So, the trucker will have to pre-pull the container, store it in a secure yard, which costs more money obviously and comes with liability for the security of the container.”

And then, even if everyone agrees to turn the lights on and unlock the doors overnight, who’s going to do the job? Biden’s economy has stimulated everyone to stay on the couch.

So, Biden demanded vaccine mandates and handed out unemployment checks to keep people at home—and it worked.

Now, working people have to spend more money on gas thanks to the closed pipelines, shell out even more of their hard-earned money than normal for their Christmas gifts thanks to inflation caused by his runaway spending, and now, they can’t even find gifts to buy because of his environmental regulations and sweetheart deals for people who don’t want to work.

Thanks, Joe. Have a Merry Christmas.

And remember, there are only 388 shopping days until the midterm elections.