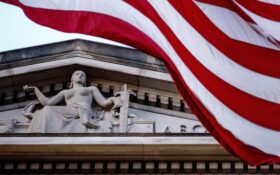 President Joe Biden’s choice to lead enforcement of competition laws at the Justice Department has won Senate approval as his administration pursues action against outsized market power it has condemned in several industries, including Big Tech, health care, airlines and agriculture.

The bipartisan vote Tuesday was 68-29 to confirm Jonathan Kanter, an antitrust lawyer who has opposed tech giants in private practice, as assistant attorney general heading the Justice Department’s antitrust division. The position has been without a permanent head for nearly a year as Biden and his advisers sifted through a number of qualified candidates and then nominated Kanter in July to face Senate vetting.

Kanter, who also has experience in government at the Federal Trade Commission, will join the team of competition regulators and advisers that Biden has assembled to carry out an anti-monopoly agenda. They include Big Tech critic Lina Khan, elevated by Biden in June to head the FTC, and Tim Wu, another previously outspoken critic of Big Tech, who is a top White House adviser on technology and competition policy. The FTC, an independent regulatory agency, also oversees consumer protection and privacy in addition to competition issues.

As part of the efforts to increase competition, protect consumers and curb corporate dominance, Biden has ordered regulators to give greater scrutiny to mergers.

At his confirmation hearing last month, Kanter promised vigorous enforcement to ensure a level playing field for businesses and consumers. He said he’s been a strong advocate of “vigorous antitrust enforcement in the technology area, among others.”

As head of the antitrust division, Kanter likely will direct prosecution of a landmark case against Google filed by the Trump Justice Department in October 2020, accusing the company of abusing its dominance in online search and advertising. Kanter has represented smaller companies that have competed with Google and have lodged complaints about the search giant’s conduct.

The FTC, meanwhile, is pursuing an antitrust lawsuit against Facebook, now called Meta, asserting that the tech giant is a monopoly in the social networking market. The agency is seeking remedies that could include a forced spinoff of the company’s popular Instagram and WhatsApp messaging services, or an overall restructuring.

Kanter, like Khan, will deal with competition issues in industries and companies beyond Big Tech. But it’s the tech giants — Google, Meta, Amazon and Apple — and their market dominance that have drawn the greatest public interest, most epic legal actions and sharpest rhetoric from lawmakers.

In a significant antitrust action, the Justice Department this month sued to block the proposed $2.2 billion acquisition of Simon & Schuster by German media giant Bertelsmann’s Penguin Random House, already the biggest U.S. book publisher. The regulators said the industry consolidation would hurt authors and, ultimately, readers, giving Penguin Random House “outsized influence” over which books are published in the U.S. and how much authors are paid.

The company wants to buy Simon & Schuster, whose authors include Stephen King, Hillary Clinton and John Irving, from television and film company ViacomCBS.

The so-called Big Five book publishers, with Penguin Random House the largest and Simon & Schuster at No. 4, control an estimated 80% of the U.S. book market.

In another action this fall, the Justice Department challenged American Airlines’ partnership with JetBlue, asserting that it could bring higher air fares.