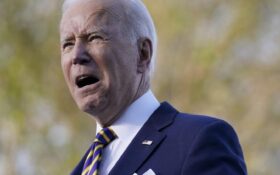 You really can’t make this stuff up.

When a sitting congressman asked the Biden administration why illegal aliens looked like they were flying on airplanes without proper ID, the Democrat-controlled government wrote back that they had shown an acceptable document… because the TSA will accept an arrest warrant as a form of identification.

Only real criminal aliens qualify to fly next to you, bump into you at the airport, or jet into your hometown.

The Daily Caller learned about the new policy from a Republican in state on the border—but the arrest papers policy applies in all 50 states.

Just before Christmas Rep. Lance Gooden, R-Tex., wrote a letter to the Transportation Safety Administration about a large number of illegals who had been spotted getting on airplanes without showing an ID.

“The Transportation Security Administration is putting millions of Americans flying for Christmas at risk by allowing unknown, and potentially dangerous, immigrants to board commercial aircraft,” he wrote last month. “The American people deserve transparency and to know U.S. national security and their personal safety are not being put at risk.”

The Biden administration wanted to put his mind at ease that they know exactly who these people are—because they have their fingerprints.

Biden’s bureaucrats say that the TSA will accept two different kinds of document from illegals as proof of their identity: a “Warrant for Arrest of Alien” or a “Warrant of Removal/Deportation.”

Their arrest warrant gets them onto your plane.

And this isn’t just something it lets illegals do on paper. The TSA—which is part of the Department of Homeland Security—says 159 illegal aliens fly on U.S. airliners by showing one of these two arrest papers every single day.

Once they get booked for breaking the law, the Biden administration will let illegals fly the friendly skies.

But don’t get any ideas, dear reader, if you’ve had a recent scrape with the law. This bizarre “homeland security” policy doesn’t apply to the homeland. Only illegal aliens can flash their most recent arrest docs and get waved onto seat 17A. Citizens born in the USA can’t show those papers. Neither can legal immigrants to the U.S. or permanent lawful residents. Even citizens of Canada, our closest ally, don’t get to use arrest warrants to prove who they are—just people who broke our laws to come to our country, possibly to commit welfare fraud or acts of terrorism.

The TSA insists there’s nothing to worry about—they check people against a terrorism watchlist before they get to the airport, and the ones who pass get stronger security measures before they get on the plane. “TSA is committed to ensuring that all travelers, regardless of immigration status, are pre-screened before they arrive to the airport, have their pre-screening status and identification verified at security checkpoints, and receive appropriate screening based on risk before entering the sterile area of the airport,” TSA Administrator David Pekoske wrote back to Congressman Gooden.

And it really adds up. The TSA letter said in the first 11 months of 2021, January-the end of October, the National Transportation Vetting Center processed 45,577 non-citizens and non-U.S. nationals using DHS documents and — Good news! — the NTVC was able to verify 44,947 of them. That just leaves 630 illegal immigrants… doesn’t that make you feel safer?

When Gooden got the letter, he said he couldn’t believe his eyes.

“TSA’s response confirms the Biden Administration is knowingly putting our national security at risk,” Gooden told the Daily Caller News Foundation after he read their response. “Unknown and unvetted immigrants shouldn’t even be in the country, much less flying without proper identification.”

Multiple reports say that the Biden administration is flying illegal aliens all over the country—especially red states like Florida or swing states like Pennsylvania.

Is he trying to tip the balance of the state toward the Democrats, since new immigrants and Hispanics typically vote 60-70% in favor of the Democratic Party?

No one asked Biden during his two-hour press conference this week. It’s just as well; his answer would be as phony as their ID.

But you should know it’s happening. It’s probably happening in your state. And the Biden administration has signed off on the policy hook, line, and sinker.

When an administration is committed to breaking the big laws, the small ones can’t hold up. Now, showing an arrest warrant gets you rewarded with travel in the United States.

People with arrest warrants ought to be in jail, not in first class.

It’s a huge smack in the face to the children that TSA agents traumatize, the elderly women who get patted down, and the fed-up veterans with PTSD who refuse to go along with some TSA flunky who wants to take them into a locked room and treat them like animals.

If the polls show anything, it’s that America knows it deserves better than the Biden administration—and Joe and Kamala will find that their days in the White House are going to fly by quicker than Chuck Yeager.