Biden's monthly debt soars 562% in one year - The Horn News 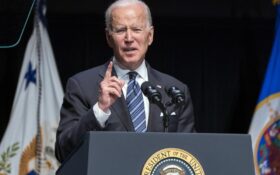 The Treasury Department said Friday the federal budget deficit was 562% higher on a monthly basis compared with September 2021, largely reflecting President Joe Biden’s controversial plans to forgive student debt as several years’ worth of costs were compressed into one month.

The federal deficit soared in the final fiscal year month of September because of the Democratic president’s plans to forgive student debt as the Education Department modified the terms of its loans for college and graduate school.

Biden in August announced $10,000 in federal student debt cancellation for those with incomes below $125,000 a year, or households that make less than $250,000 a year. Those who received federal Pell Grants to attend college are eligible for an additional $10,000 in forgiveness.

Biden’s plan makes 20 million people eligible, mostly those in the middle and upper class, to get their debt erased entirely.

Republican lawmakers have criticized debt forgiveness as financially irresponsible, saying it’s a giveaway to borrowers who attended college that comes at the expense of blue-collar workers. Borrowers are taking loans to invest in themselves, but then decided they didn’t want to pay back their loan deals.

States and groups affiliated with Republicans have filed lawsuits to try to block the forgiveness. A federal judge on Thursday dismissed a suit from six GOP-led states, saying the states lacked legal standing, a decision that the states intend to appeal.

In May, the Congressional Budget Office expected the federal deficit to fall slightly in 2023 and then start to rise in the years ahead to $2.25 trillion annually a decade from now.