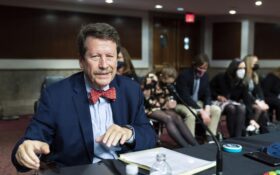 President Joe Biden’s pick to lead the Food and Drug Administration has stalled in the narrowly divided Senate, an unexpected setback that could delay decisions on electronic cigarettes and a raft of other high-profile health issues pending at the agency.

Biden nominated Dr. Robert Califf for the job in November after a 10-month search that critics complained left a leadership vacuum at the powerful regulatory agency, which has played a central role in the COVID-19 response effort.

Califf, a cardiologist who was an FDA commissioner under President Barack Obama, was viewed as a safe choice who could easily clear the Senate, given his 2016 confirmation by an overwhelming vote, 89-4.

But his latest Senate bid has been snared by political controversies on both the left and right that threaten to sink his nomination and leave the FDA in limbo for months — possibly even until a new Congress convenes next year.

“If he can’t get confirmed it bodes poorly for almost anyone else who could be nominated,” said Dr. Stephen Ostroff, who twice served as acting FDA commissioner. “What you’re seeing here is a lot of extraneous issues inserting themselves into the confirmation process and the same thing would happen to virtually anyone else nominated.”

Five Senate Democrats are opposing Califf due to his consulting work for drugmakers and the FDA’s track record of overseeing addictive painkillers that contributed to the U.S. opioid epidemic. That group includes Sens. Joe Manchin of West Virginia and Maggie Hassan of New Hampshire, both from Republican-controlled states ravaged by the epidemic.

With Sen. Ben Ray Luján of New Mexico absent and recovering from a stroke, Democrats need the support of six Republicans to confirm Califf.

The Biden administration remains “incredibly confident” that Califf will be confirmed, according to a White House official who spoke on condition of anonymity to discuss the effort.

Califf will have held one-on-one meetings with 49 senators by the end of this week, according to the official, an extremely aggressive outreach effort for an FDA nominee. Health and Human Services Secretary Xavier Becerra and top White House aides are also lobbying senators on his behalf.

The White House long assumed enough Republicans would support Califf to easily overcome any Democratic defections, given his strong support from the pharmaceutical lobby. Indeed, Califf seemed to be cruising toward confirmation after a cordial hearing before the Senate’s health committee in December, which included friendly exchanges with most of its Republican members.

But two days after his appearance the FDA eased longstanding restrictions on abortion pills that allowed women to order them through the mail. Although Califf had no role in that decision, dozens of anti-abortion groups lobbied Republicans to vote against him based on earlier changes impacting the medications while he was at the FDA.

The influential Susan B. Anthony List warned that any Republican senators supporting Califf would lost their ‘A+’ rating from the anti-abortion group, which has raised tens of millions to support its preferred candidates.

Currently only a tiny handful of Republicans are publicly backing Califf, including Sen. Richard Burr of North Carolina, who represents Califf’s home state and is retiring this year, and Sen. Susan Collins of Maine, one of the only remaining pro-choice Republicans in Congress.

A permanent FDA chief can’t come soon enough for the beleaguered agency, which has been straining for months under an intense pandemic workload even as several scientific disputes have battered its reputation.

FDA advocates worry the increasing politicization of the nomination process will leave the FDA further adrift without clear direction.

“It is troubling to see Dr. Califf judged on issues that are a very small part of the FDA’s responsibilities,” said Steven Grossman of the Alliance for a Stronger FDA, which represents industry, patient and consumer groups that interact with the agency. “This narrow focus increases the likelihood there will be more and longer periods when FDA is without permanent leadership.”

The White House is unlikely to send another FDA nominee to Capitol Hill if Califf can’t clinch 50 votes, noted Grossman, a former HHS and Senate staffer.

In that scenario, the current acting FDA chief, Dr. Janet Woodcock, could continue leading the agency for months to come — potentially into next year. She can serve as acting commissioner as long as Califf’s nomination is pending, followed by another 210 days after it is withdrawn or expires, under federal law.

But that’s far from ideal. Acting commissioners serve mainly as caretakers and generally cannot set new goals or priorities for the agency.

The FDA has a slate of high-stakes decisions ahead that were expected be made with input from the incoming commissioner. Those choices include whether to ban e-cigarettes linked to the spike in underage vaping by millions of teenagers.

“The more controversial the decisions, the more difficult they become when you’re in an acting position,” Ostroff said.

The realization that vaping restrictions and other Democratic priorities may be in limbo could help push Califf over the finish line, observers note.

Last week Sen. Elizabeth Warren, D-Mass., announced her support for Califf after he agreed to not work for any pharmaceutical company for at least four years after leaving the FDA. Califf has recently served as a board director or adviser to more than a half-dozen drug and biotech companies, according to his ethics disclosure form.

“I think all this publicity that ‘maybe Califf isn’t going to make it’ is going to get people more focused on why they want Califf there,” said Diana Zuckerman, of the nonprofit National Center for Health Research. “I think he still has a very good chance.”