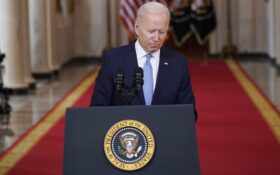 “I believe that we will hold the House,” Pelosi predicted on Monday.

That hope was all but destroyed by another top Democratic leader: Far-left Rep. Cori Bush, D-Mo.

Some Republicans have placed an emphasis on crime in their television advertisements for the midterm elections.

Yet on Thursday, Bush refused to back down from her “Defund the Police” rhetoric that gained mainstream media attention during the summer of the 2020 riots after the murder of George Floyd.

“There is no data that actually shows that saying ‘defund the police’ cost actual elections,” Bush claimed without evidence. “Not that that one thing specifically did it. You know, there were other factors there.”

“You know, someone lost elections, you know, when we look at what happened two years ago, there were — there were other things at play,” Bush said.

“When we talk about, right now, we have Republicans saying ‘Defund the FBI,'” she continued. “You know, where are we… where is our narrative?”

“Let me tell you this: There were not Democrats scaling walls on January the 6th when I was at the Capitol,” Bush said. “They weren’t the ones outside scaling walls.”

“Democrats didn’t kill police officers,” she claimed, ignoring the uptick in murders of police officers that occurred during the Black Lives Matter protests and riots in 2020.

“‘Defund the Police’ is not the issue,” she claimed.

Lemon asked if she would “double-down” on “Defund the Police” heading into the 2022 midterm elections.