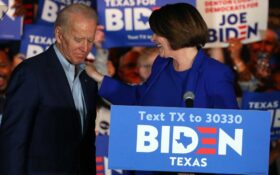 But the Biden camp has thrown what insiders are calling a “curveball” into the process.

The move has changed what everyone thought they knew about Biden’s choice.

According to a close campaign aide, Sen. Amy Klobuchar, D-Minn., has been personally asked by the Biden camp to go through an intense vetting process as part of the vice president search.

The senator is credited by many in the media for helping Biden capture the Minnesota primary by dropping out of the race and suddenly endorsing Biden in her home state, paving the way for the former Vice President to deal a major blow to Sen. Bernie Sanders, I-V.T., primary hopes.

Biden has been open in his praise for Klobuchar.

Biden’s interest in Klobuchar is key.

Eyes will be on Minnesota heading into November, a battleground state key to victory for both Biden and President Donald Trump.

The Gopher State has been increasingly recognized by political experts as a state very much in play for Trump despite its historic liberal bend.

So Biden has a strategic choice to make.

As one potential candidate is garnering interest, another announced she is dropping out.

Sources close to Biden say that Sen. Jeanne Shaheen, D-N.H., is declining the option to be vetted.

The “veepstakes,” as many in the media are calling it, could have big implications.

Democrats are hoping that Biden’s veep –– should he even win the White House –– is capable of taking over for the 77-year-old, who would be the oldest president to ever assume the Oval Office.