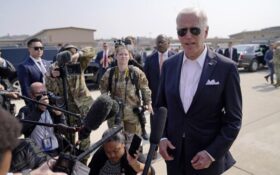 President Joe Biden on Wednesday named Kim Cheatle, a veteran Secret Service official, to be the agency’s next director as it faces controversy over missing text messages around the time of the Jan. 6, 2021, Capitol riot.

Cheatle, who left the Secret Service in 2021 for a job as a security executive at PepsiCo, takes the reins as multiple congressional committees and the Department of Homeland Security’s internal watchdog are investigating the missing text messages, which the Secret Service has said were purged during a technology transition.

Cheatle had served in the Secret Service for 27 years and was the first woman to be named assistant director of protective operations, the division that provides protection to the president and other dignitaries.

Cheatle had served on Biden’s protective detail when he was vice president. During that time, Biden “came to trust” her judgment and counsel, he said in a statement.

Biden said that he and first lady Jill Biden “know firsthand Kim’s commitment to her job and to the Secret Service’s people and mission.”

Cheatle replaces James Murray, who had announced his retirement to take a position with Snap, the social media company best known for its app, Snapchat. He announced last month that he would delay his retirement amid the investigations while Biden looked for a new director.

The Secret Service has faced increasing criticism after admitting that text messages from around the time of the attack of Jan. 6, 2021, on the Capitol were deleted.

The agency has said the messages were purged when its phones were migrated to a new system in the weeks after the 2021 attack. Rep. Stephanie Murphy, D-Fla., a member of the House committee investigating the attack, has said the Secret Service told the committee that it left it up to individual agents to decide what electronic records to keep and what to delete during the process.

The committee has taken a recent, renewed interest in the Secret Service following the dramatic testimony of former White House aide Cassidy Hutchinson about Trump’s actions on the day of the insurrection.

The Secret Service has said all procedures were followed and pledged “full cooperation” with all of the reviews and investigations, including a criminal investigation by the Homeland Security’s inspector general.

Secret Service spokesman Anthony Guglielmi said Cheatle “is a law enforcement veteran and served as the first female assistant director in charge of all protective operations for the agency before retiring.”

“We are ecstatic to welcome her back as the next Director of the United States Secret Service,” he said in a tweet.