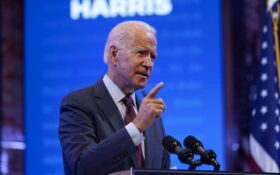 President Joe Biden ran on a platform that included shutting down the so-called “kids in cages” detention facilities for child migrants, which many on the left even called “concentration camps.”

Now, more than 50 days into the Biden presidency, those facilities haven’t been shut down.

They’re not winding down, either.

If anything, they’re expanding: A new report finds the number of children in border detention facilities has just reached a record high.

The Washington Post said last week that nearly 3,500 children who crossed the border without adults were being held in detention facilities, waiting for beds.

That’s nearly 1,000 more “kids in cages” than were ever held at once at any point in the Trump administration, which reached its high in 2019, when 2,600 kids were held in those facilities.

Not even CNN – typically friendly turf for the president – could gloss over the situation. The network reported that the children are being held in facilities that “are akin to jail cells and not intended for kids.”

CNN admitted it was an “urgent challenge” for Biden.

The kids are waiting in these detention facilities because the shelters for undocumented children are filled beyond capacity, with some 8,500 awaiting placement into the homes of relatives or sponsors.

So right now, kids are being detained in prison-like conditions – aka kids in cages – for an average of 107 hours, or four and a half days, which is well beyond the legal limit of 72 hours for these types of detentions.

Most are between 13 and 17 years old, The Washington Post reported, adding that some 450 more teens are sent into the facilities every day.

This crisis has been unfolding since Biden took office, yet so far he’s done little to change it.

And he’s feeling the heat from within his own party.

This is not okay, never has been okay, never will be okay – no matter the administration or party. https://t.co/AEV7s7QQnB

Then, she went even further… bringing up a talking point loved by the far left as she urged Biden to abolish many of the agencies that protect the border.

Theresa Cardinal Brown, who was a senior adviser on immigration during the Bush and Obama administrations, defended the moves.

“For a lot of the advocacy organizations that saw bad things happen in facilities under the Trump administration, they’re disappointed Biden is reusing them,” Brown told NPR. “But really what are the alternatives the Biden administration would have right now available to them?”

Except that’s not what Biden promised when he made the detentions and the jail-like conditions a central talking point of his campaign.

During one of the debates, Biden said dramatically that the facilities were loaded with children “ripped from their arms and separated,” and who are now alone and have “nowhere to go, nowhere to go.”

But during that debate, Biden was also confronted with an uncomfortable truth about detaining children: It happened during the Obama administration, too… when Biden was vice president.

He couldn’t defend it.

“We made a mistake,” he admitted. “It took too long to get it right.”

With the number of kids in detention facilities now increasing, it looks like the “mistake” continues… and it’ll take even longer to “get it right.”