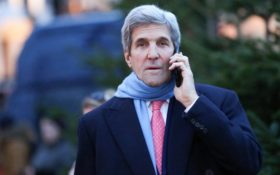 U.S. President Joe Biden had an old, reliable stand-in when he fell behind schedule at the U.N. climate conference.

U.S. climate envoy John Kerry tried to keep the program moving along when Biden didn’t show up on time for a Tuesday side event on reducing methane gas emissions..

Kerry, who served in the U.S. military, said the delay – and wait – reminded him of the Navy.

“We had a saying: Hurry up and wait,” he joked before returning to his seat.

The wait for Biden continued. When the president arrived, Kerry, a former U.S. senator and secretary of state, then went to the mic a second time to deliver a lengthier introduction.

“I’ll do what I learned to do in the Senate, which is filibuster,” Kerry said, referring to the practice of U.S. senators talking ad nauseum to delay votes.

Biden attracted criticism earlier in the meeting, when he appeared to fall asleep.

John Kerry, stalling for a late President Biden: “I’ll do what I learned to do in the Senate, which is filibuster.”