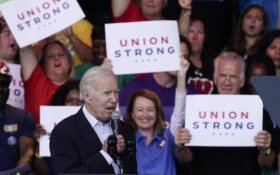 President Joe Biden has seen his approval rating inch upward after an 11-month decline… but that may have all come apart after his primetime speech earlier this month.

Biden was speaking outside Philadelphia’s Independence Hall, cloaked in red light and flanked by two Marines, when he forcibly went after supporters of former President Donald TRump.

“MAGA forces are determined to take this country backwards,” Biden said Thursday in his 24-minute speech. “They promote authoritarian leaders, and they fan the flames of political violence that are a threat to our personal rights, to the pursuit of justice, to the rule of law, to the very soul of this country.”

Trafalgar Group conducted a survey of reactions to the speech… and their findings may surprise you.

The pollsters heard from 1,084 “likely general election voters” during the three days following the speech, between Sep. 2 and Sep. 5.

They asked the respondents, “What is your opinion of President Biden’s recent primetime address to the nation in which he
accused his political opponents of representing ‘an extremism that threatens the very foundations of our republic?'”

The respondents could choose either, “It represents a dangerous escalation in rhetoric and is designed to incite conflict amongst Americans,” or, “It is acceptable campaign messaging that is to be expected in an election year.”

With this speech, Biden apparently caused worries among a landslide majority of likely voters, a majority well outside the poll’s 2.9 percent margin of error.

Biden alienated Republicans, and he failed to energize his base.

Granted, this particular poll doesn’t always show its work. For example, the pollsters have yet to specify whether they asked the question via email, text message, or voice recording.

Still, Biden is suffering in other polls, too.

According to FiveThirtyEight’s poll average, Biden has seen his approval rating grow more slowly since the speech.

He also remains widely unpopular, despite the modest bump.

Biden gave a similar speech on Labor Day, although he presumably reached a smaller audience.