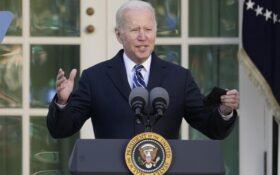 On Wednesday, President Joe Biden apparently tried to tour the 2021 Bipartisan Infrastructure Law… but you wouldn’t know what he was talking about from watching the speech.

Biden has become known for his “senior moments” and gaffes, but this is a new low.

Take a look and try to understand this —

“I have never, ever, ever been more optimistic about America’s prospects than I am today. Never. Never. I’ve traveled to over 140 countries around the world,” Biden said. “As I was — I’ll paraphrase the phrase of my old neighborhood: The rest of the countries — the world is not a ‘patch on our jeans’ if we do what we want to do and we need to do.”

Biden continued, “Think about it. Name me another country in the world that sets its sights that didn’t complete it.”

“Thanks to those here today who are in the Congress, who were willing to cross the aisle to get something done,” Biden said. “They know that passing these two bipartisan laws just by themselves was more important than partisan politics. And it’s going to make a gigantic — (sneezes) — excuse me — a gigantic difference.”

Biden made the remarks from the Brent Spence Bridge in Covington, Kentucky — a suburb of Cincinnati, Ohio.

“Let me close with this,” Biden concluded. “After years of politics being so divisive, there are bright spots across the country. The Brent Spence Bridge is one of them. A bridge that continues and connects different centuries, different states, different political parties. A bridge to the vision of America I know we all believe in, where we can work together to get things done.”

Biden: "I’ll paraphrase the phrase of my old neighborhood: The rest of the countries, the world is not a patch in our jeans, if we do what we wanna do, we need to do." pic.twitter.com/z7oC29GRjs