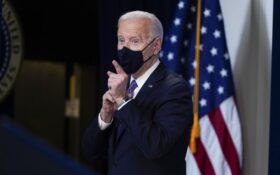 President Joe Biden’s dogs — Champ and Major — are roaming the White House again, after having been sent to Delaware when Major, the younger dog, injured a Secret Service agent.

White House press secretary Jen Psaki said at the Wednesday briefing that the dogs met the Bidens last weekend at Camp David in Maryland and came back to Washington on Sunday.

The dogs had been in the Biden’s home state of Delaware, where Major received some additional training after having been startled by a Secret Service agent who received a minor injury from the fracas. One of the two German shepherds waited on the balcony of the White House on Tuesday evening as Marine One landed on the South Lawn, having ferried the president back from a speech in Columbus, Ohio.

“The dogs will come and go and it will not be uncommon for them to head back to Delaware on occasion as the president and first lady often do as well,” Psaki said.