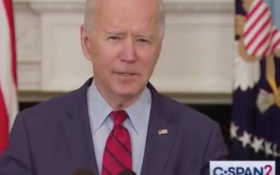 President Joe Biden has officially made the call to ban “assault weapons” throughout the country.

In an address for the tragic grocery store massacre in Boulder, Colorado that left 10 people dead, Biden ended his speech with the big message.

In a short appearance, he implored members of Congress to swiftly act on banning “assault weapons and high capacity magazines.”

“I urge my colleagues in the House and Senate to act,” he said. “We can ban assault weapons and high-capacity magazines in this country once again.”

His message comes on the heels of two separate mass shootings that have rocked the country, including the horrific spa massacre in Georgia that killed eight.

Biden wants them to pass bills aimed at making background checks more difficult when it comes to purchasing weapons.

“The United States Senate, and I hope some of them are listening,” Biden said, “should immediately pass the [bills] that close loopholes in the background check system. These are bills that received votes from both Republicans and Democrats in the House.”

According to USA Today, early in March the House passed two bills — H.R. 8 and H.R. 1446 — both aimed at expanding background checks significantly.

During his short message, the President also added his condolences to the victims of the shooting and the law enforcement officers who responded to the scene.

Once again, he did not take questions from the media.

You can take a look at his official address below:

BREAKING: Biden calls for a ban on “assault weapons” and “high-capacity magazines” pic.twitter.com/U5VfqX28B4