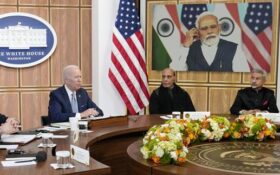 President Joe Biden spoke on a video link with Indian Prime Minister Narendra Modi on Monday, stressing the countries’ shared values as the U.S. has pushed India and others to take a harder line against Russia’s invasion of Ukraine.

Biden opened the conversation by emphasizing the defense partnership between the two countries and by saying the U.S. and India are going to “continue our close consultation on how to manage the destabilizing effects of this Russian war.”

“The root of our partnership is a deep connection between our people, ties of family, of friendship and of shared values,” the U.S. president said.

India’s neutral stance in the war has raised concerns in Washington and earned praise from Russian Foreign Minister Sergey Lavrov, who lauded India this month for judging “the situation in its entirety, not just in a one-sided way.”

Modi called the situation in Ukraine “very worrying,” and he noted that an Indian student lost his life during the war.

The prime minister said he has spoken with Russian President Vladimir Putin and Ukrainian President Volodymyr Zelenskyy, appealing to both of them for peace. India has condemned the killings uncovered in the city of Bucha and has called for an independent investigation.

Still, India has refrained from some efforts to hold Russia accountable for its invasion. India abstained when the U.N. General Assembly voted Thursday to suspend Russia from its seat on the 47-member Human Rights Council over allegations that Russian soldiers in Ukraine engaged in rights violations that the U.S. and Ukraine have called war crimes.

In the virtual meeting, Biden planned to talk about the consequences of Russia’s war against Ukraine “and mitigating its destabilizing impact on global food supply and commodity markets,” White House press secretary Jen Psaki said in a statement Sunday.

They’ll discuss “strengthening the global economy, and upholding a free, open, rules-based international order to bolster security, democracy, and prosperity in the Indo-Pacific,” she said.

Last month, the state-run Indian Oil Corp. bought 3 million barrels of crude from Russia to secure its needs, resisting entreaties from the West to avoid such purchases. India isn’t alone in buying Russian energy, however. Several European allies such as Germany have continued to do so, despite public pressure to end these contracts.

Iraq is India’s top supplier, with a 27% share. Saudi Arabia is second at around 17%, followed by the United Arab Emirates with 13% and the U.S. at 9%, the Press Trust of India news agency reported.