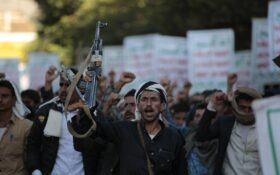 A clan-based militia government in the Arab world’s poorest country is presenting the Biden administration with another foreign policy setback, as Yemen’s Houthis launch cross-border drone and ballistic-missile strikes rattling the wealthy oil and banking hubs of the skyscrapered Gulf.

In the face of three such strikes in as many weeks, U.S. officials are studying financial measures targeting the Houthis and the group’s top figures, with new sanctions possible as soon as this week. It’s the latest in a so-far unsuccessful push by the Biden administration to get Houthi leaders into peace talks and wind down an eight-year war that has taken a devastating toll on Yemen, a nation of millions of impoverished people and cities thousands of years old, afflicted by misgovernment and wars.

The escalation makes Yemen one of the Middle East conflicts keeping the Biden administration and military deeply engaged in the region. That’s despite President Joe Biden’s vows to turn U.S. focus to what his administration sees as core U.S. challenges, including dealing with the rise of China.

Houthi fighters launched their latest air barrage into the United Arab Emirates on Monday, as Israel’s president visited the UAE. Missile defense batteries operated by UAE forces and U.S. troops based in the emirates fired back to intercept.

From Biden down, U.S. officials are scrambling to assure Gulf strategic allies, including Saudi Arabia and the UAE, they will provide defense support.

“America will have the backs of our friends in the region,” Biden told reporters after Monday’s strikes, which with the others are a factor in rising global petroleum prices.

Biden administration officials appeared taken aback and frustrated early on at the Iran-backed Houthis’ determination to keep fighting to win control of more of Yemen, against a Saudi-led coalition equipped with the best U.S. arms that hundreds of billions of dollars can buy.

Biden’s team began his administration distancing the U.S. from military involvement in Yemen’s war, where both sides are accused of human rights abuses, and making a diplomatic push for peace talks. But Houthis scorned U.S. diplomats and their peace-talks initiative, and stepped up offensives instead.

“What I would hope … is that is the administration has now recognized that strategy, whether it was right or wrong in February of 2021, is not working, has not worked, and therefore they need to change their approach,” said Gerald Feierstein, the Obama administration’s ambassador to Yemen from 2010 to 2013.

The Saudi-led coalition battling the Houthis has intensified airstrikes, including on Yemen’s Houthi-held capital, Sanaa, in retaliation for the Houthis’ missile and drone strikes into the UAE, which follow sporadic strikes into Saudi territory. The retaliatory airstrikes have added to the war’s civilian toll and drawn condemnation from U.N. officials and some Democrats in Congress. But they’ve failed to stop the Houthi missiles and attack drones.

Some analysts argue the strikes are meant as an implicit threat that Israel could be within range of the Iranian-supported Houthis as well.

A family-led movement from northern Yemen’s mountains, Houthis emerged as one of the strongest of numerous rival groups vying for position in Yemen early in the last decade, a time of great political upheaval.

Houthis moved south, capturing the capital by 2014 and much of the rest of the north. A Yemen government backed by the U.N. and Saudi Arabia fled into exile in Saudi Arabia. The Saudi-backed coalition, aided by the U.S. until the Biden administration announced last year it was ending offensive support, sought to restore the rival government. Iran has supported the Houthis increasingly as the war goes on, including with what the UAE says were the missiles fired into its territory.

The problem now: After diplomacy has made little headway, and the Saudi-led coalition has failed to win militarily, no one seems to have any great ideas about how to stop the violence.

A UAE-backed local ground force from Yemen’s south was successful recently at helping roll back Houthi advances in the south. Many believe the Houthis’ cross-border strikes now are to pressure the UAE to sideline those forces.

But no outside power shows any appetite to get more involved militarily in what, up to now, has been a humanitarian catastrophe but a strategic sideshow.

After the Houthis began their current strikes into the UAE, Biden told reporters last month he was considering returning the Houthis to the list of foreign terrorist groups, a designation President Donald Trump made in his last days in office.

Biden took the Houthis off the terror list as one of his first acts. Saudis and the Emiratis have pushed to put them back on. The designation restricts others from financial and other dealings with the Houthis. Opponents say the designation had little impact on the Houthis, an insular group with few financial dealings overseas, but devastated aid and commercial food and fuel shipments into Yemen, where some 80% of the population lives under the de facto Houthi government.

Feierstein, the former ambassador, and others say the Biden administration can craft a new terror designation so as to lessen the impact on humanitarian groups and other conduits of vital goods.

Humanitarian groups say even the hint of that move by the U.S. could scare food and fuel businesses from working in Yemen, driving up costs and putting food and fuel out of the reach of many.

“That’s what we fear the most for a country that suffered this much, for this long,” said Amanda Catanzano, vice president of policy for the International Rescue Committee. “Where more than half the population doesn’t have enough to eat, and 5 million people are on the brink of starvation.”

Individual sanctions on Houthi leaders at least would have the impact of alarming those individuals — making them aware that the United States was aware of who they were, and might be thinking of targeting them, Abo Alasrar said.

“Now that’s scary. That would be scary for them,” Abo Alasrar said. “And that’s where things could actually be real.”