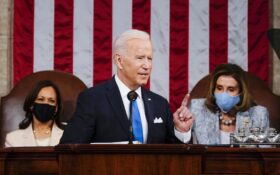 While visiting a Ford factory in Dearborn, Michigan on Monday, Biden was test-driving an electric F-150 pickup truck when he was questioned about the escalating violence in the Middle East under his administration.

What he said left reporters laughing — but critics furious at the “impeachable” offense.

“Mr. President, can I ask you a quick question on Israel before you drive away since it’s so important?” one reporter asked as Biden pulled up in the new truck.

Biden joked that he would rather kill the journalist than answer his questions.

“No, you can’t. Not unless you get in front of the car as I step on it,” he quipped. Biden added, “I’m only teasing” before speeding off.

If former President Donald Trump had pulled the same stunt, the media would be calling for his impeachment.

They’d be talking nonstop about Trump’s incitement of violence. They would talk about the threat journalists are under with a Republican in the White House. The mainstream media would spend hours discussing the controversial moment, bringing in experts and pundits from around the country to weigh in.

Because it was President Joe Biden, however, the media laughed it off… despite critics pointing out that it was a potentially impeachable offense.

“Was it a joke? Sure. Would Trump have been able to make that joke? Hell no,” conservative activist Wayne Dupree responded. “Seriously, they would have impeached him. That’s how biased and ridiculous our propaganda media and politicians truly are.”

Critics on social media also pointed out the double-standard.

“Biden’s attack on the press is a threat to our democracy,” one social media user said, parroting the frequent attacks on the Trump administration.

“They would have impeached Trump for this. And they freaking know it,” a critic pointed out.

“Joe Biden’s threatening rhetoric is putting the lives of journalists in peril,” another critic said.

You can see the exchange below —

REPORTER: Mr. President, can I ask you a quick question on Israel before you drive away since it’s so important?

BIDEN: No you can’t. Not unless you get in front of the car as I step on it. I’m only teasing.pic.twitter.com/A3jrsIi5mR