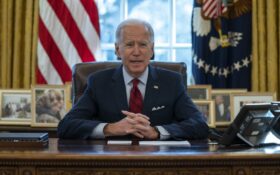 President Joe Biden has some questions to answer after one of his top administration officials was caught in an explosive hot mic moment strategizing a plan to “jam through”another massive Congress spending bill.

The two apparently thought the discussion couldn’t be overheard.

“We’ll get there,” Buttigieg says about passing the bill, with or without Republican support. “I’m all ears until then.”

“Most likely, we’re going to have to use reconciliation,” he said, referring to the procedure the Senate can use for spending, revenue, and debt-limit bills that avoids a filibuster by the minority party.

“The Republicans will be with you to a point, and then…” Cardin was overheard saying before Buttigieg stopped him.

“Yeah, let’s clear this out,” the Transportation Secretary said, pointing away from the camera before turning and waving to the media. “Thanks again, everybody.”

“But, nonetheless, hopefully, we will have bipartisanship,” she said.

Republican leadership has expressed support for an infrastructure bill if their input is accepted, which has not been in the case in the past.

Wyoming Sen. John Barrasso, the No. 3 Senate Republican, said the House in the last Congress refused to embrace a $287 billion bill unanimously passed by a Senate committee and changed it in a way that Republicans could not accept.

“What did the House do? They replaced our highway bill with the Green New Deal,” Barrasso told The Associated Press. “So they ignored what we have done in a bipartisan way. If they would take the model that we came up within the committee in the Senate for highway and transportation, I think that’s a very good start. I talked with the secretary of transportation, Pete Buttigieg, about it, and I think that is the model on which we should move forward on transportation and infrastructure.”

Sen. Joe Manchin, D-W.Va., warned that he would break party lines and block Biden’s infrastructure bill if Republicans were not included. That would break the current 50-50 party tie in the Senate. Vice President Kamala Harris holds the tiebreaking vote.

You can see the hot mic video for yourself here —

Sen. Ben Cardin, as heard on a C-SPAN mic, tells Transportation Secretary Pete Buttigieg that Democrats will “most likely have to use reconciliation” on an infrastructure package as they did with the Covid relief bill.

“The Republicans will be with you to a point, and then—“ pic.twitter.com/d4Pc49WlIl