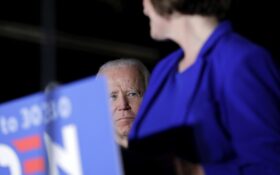 Voters have been given another answer in presumptive Democratic presidential nominee Joe Biden’s search for a running mate.

For the longest time, the political world has known that he remains committed to picking a woman.

But no one knew when he’d make his pick, until now.

Biden confirmed that he will make his choice for Vice President by Aug. 1.

The pick would be coming two weeks before the Democratic National Convention in Milwaukee.

At a digital fundraiser hosted by former 2020 rival Pete Buttegieg, Biden confessed that he was looking for someone he’s compatible with –– not just an idealogical ally.

“I think that I need somebody who in fact is simpatico with me, both in terms of personality as well as substance,” he said. “That means they don’t have to agree with me on everything, but they have to have the same basic approach to how we handle the economy and how we handle everything.”

“I want to make sure that … whoever I have has some qualities that I don’t possess as well as is willing to, in fact, tell me the truth but also do it in a way that is between the two of us, between her and me, so that they can, in fact, be completely candid with me because I want to have people around me that have strengths and capacities I don’t,” Biden added.

A political betting odds of sorts has circulated around who indeed his pick might be.

In light of the tragic George Lloyd death at the hands of a Minneapolis police officer –– Sen. Amy Klobuchar, D-Minn., who liberal pundits say failed to previously prosecute the officer in question, and Val Demings, a former police chief –– could soon be crossed off the list entirely, considering that Biden is at the mercy of his liberal voters.

Only time will tell.

But voters also got another answer as to who won’t be Biden’s VP pick.

Cortez Masto, who in 2016 became the first Latina elected to the U.S. Senate, said in a statement that she supports the former vice president but does not want to join the Democratic presidential ticket.

“I support Joe Biden 100% and will work tirelessly to help get him elected this November. It is an honor to be considered as a potential running mate but I have decided to withdraw my name from consideration,” Cortez Masto said in a statement.

She noted that Nevada’s economy is one of the hardest hit by the coronavirus, with the worst unemployment rate in the nation at 28.2%. She said she will focus on getting Nevada residents back on their feet.

Later Thursday, during an online discussion hosted by the Georgetown Institute of Politics and Public Service, Cortez Masto said it was exciting and humbling to have been considered but noted that she was elected to a six-year senatorial term.

“My fight is in the Senate, on behalf of the state of Nevada, and that’s my commitment. I can’t walk away from that right now,” she said.

In a statement released by his campaign Thursday night, Biden said he’s admired Cortez Masto as long as he’s known her and called her a “leader with integrity.”

“Nevadans are fortunate to have her fighting for them in Washington and I look forward to seeing her continue to lead in the Senate,” he said.

Cortez Masto is one of more than 10 women whose names have been suggested as possible running mates for Biden, who has committed to picking a woman.

Cortez Masto, 56, was one of the highest-profile Latinas believed to be on Biden’s short list of potential running mates. Some activists had suggested she could have helped Biden win over Hispanics whose support could be crucial to winning the presidency in November.

Cortez Masto had demurred in the past about whether she’d be interested in serving as Biden’s running mate, saying that it was flattering to be considered but that she was focused on her role in the Senate.

She is a former Nevada attorney general who was recruited by former Senate Majority Leader Harry Reid to run for his seat in 2016 when he retired.

Before serving eight years as Nevada’s attorney general, she was a federal prosecutor in Washington, D.C.