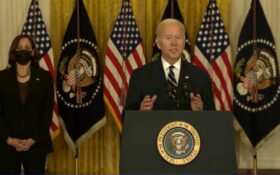 President Joe Biden has spent months on negotiations. He presided over the Senate’s passage of the Bipartisan Infrastructure Bill (B.I.F.) last August, but he has been struggling to muster enough votes for his multi-trillion Build Back Better spending plan (B.B.B.)

All the while, the around 40 House Progressives have been promising to withhold their support from the B.I.F. until the Senate’s passage of the B.B.B.

But critics say: Not so fast.

He spoke only vaguely about the deal, but he seemed to hint at a reconciliation bill to combine the B.I.F. with the B.B.B.

“Today, with my Democratic colleagues, we have a framework for my Build Back Better initiative,” Biden said. “And when paired with the Bipartisan Infrastructure Bill, we will truly transform this nation.”

Sure enough, Progressive Caucus Chair Rep. Pramila Jayapal has been speaking about her caucus’ support for Biden’s plans.

Jayapal told reporters on Thursday, “We will make significant differences once we get these two bills passed, and we’re looking forward to doing that as soon as possible.”

She even threw her support behind the B.I.F.

One reporter asked, “Commitment from Sen. Manchin and Sen. Sinema along with legislative text, would that be enough to get a vote on the B.I.F., or do you need to see it passed in the Senate?”

She went on, “Everyone in the room enthusiastically endorsed a resolution that approves, in principle, the framework that the president laid out today. We are really proud of the president — and of our Progressive Caucus and our progressive allies — for getting so many of our big priorities into the framework.”

However, it remains unclear whether the B.I.F. will receive enough Progressive support to pass the House.

Many far-left Progressive Caucus members, like Rep. Cori Bush and Rep. Rashida Tlaib, are still vowing to vote “no” on the B.I.F., they told reporters.

Plus, it remains unclear whether the deal can clear the 50-vote hurdle in the Senate… despite Biden’s optimism.

Sens. Joe Manchin and Kyrsten Sinema have tanked Biden’s previous plans, and neither senator has spoken about today’s resolution today yet. It remains unclear how they will vote.

In other words, Biden and Jayapal may be celebrating too early.

Rep. Rashida Tlaib walks out of the progressive caucus meeting, says she’s a “Hell no on BIF.”

CORI BUSH: “We need both bills to ride together and we don’t have that right now … [I feel] bamboozled because this was not what I thought was coming today. … our trust has to be in two senators that have not — in my opinion — been good faith actors up to this point." pic.twitter.com/CSjEgG6wgr