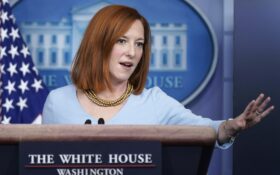 President Joe Biden is headed for the first major staff shakeup of his presidential career — and Monday, news of the upcoming personnel shuffle went public.

She was featured on a podcast where she revealed that she expects to step down from her post “in about a year,” according to reports. Although she’s not immediately exiting, her quick turnaround is surprising.

Psaki was candid when asked on the podcast about her future in the Biden Administration.

“I mean, when I talked to the inner circle of the Biden orbit about this,” she explained, “we talked about coming in and doing this job for a year, which was quite appealing to me for many reasons.”

“One, this is, what a moment in history… I think following Trump, especially if you can take the temperature down a little bit, that’s a cool thing to be a part of.”

Psaki just wanted to be aboard the train that saw former President Donald Trump out of office.

At any rate, speculation has swirled about who the replacement may be, and one early report from Hot Air indicates that it could be Symone Sanders, who is currently serving as the press secretary for Kamala Harris.

Apparently, she is gunning for the job after being “snubbed” for the gig on Biden’s staff to begin with.

Reports suggest that she was part of a major coalition that pulled Biden to the finish line, particularly with black voters.

She was purportedly “hurt” that the favor wasn’t returned and she was left out in the cold as Psaki got the nod to be Press Secretary.

And now Psaki no longer even wants the job.