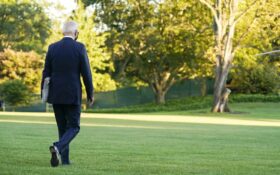 The economic numbers are in, and they aren’t good.

This morning, the federal government agency that measures the U.S. economy announced that GDP shrank at an annual rate of 0.9 percent during the second quarter of the year, which ended last month. In other words, the economy shrank by about 0.225 between April 1 and June 30.

That’s on top of dismal first quarter numbers, which show America’s economy contracted during the first quarter, which covers January through March. During that time, the economy shrank at a rate of 1.4 percent per year, about 0.35 percent per quarter.

For years, the term “recession” has colloquially referred to two straight quarters of a shrinking economy. By that definition, the United States has already entered one.

Every president handles sour economic spots differently, and President Joe Biden and his team have just unveiled an historic and unprecedented response to the economic downturn. They’re going to pretend it’s not happening.

That came one day after Treasury Secretary Janet Yellen said, “We’re in a period of transition in which growth is slowing, and that’s necessary and appropriate.”

But their own official numbers show the economy isn’t experiencing “growth” at all—and hasn’t been all year. It’s been crumbling in on itself like a dry sandcastle.

Still, White House spokesperson Karine Jean-Pierre claimed recently that “the economy is in a better place than it has been historically.” America is not in recession, she says, because Americans are “financially comfortable.”

It seems like most voters haven’t gotten the memo. This morning, USA Today reported that 76 percent of Americans say the country is on the wrong track.

Instead of rushing out a Clinton-like message that “I feel your pain”—or maybe even change its inflation-inducing economic policies—the Biden administration has gone all-out in its attempt to redefine the meaning of the word “recession.”

Biden officials say the term “recession” doesn’t care about your feelings—or the way most economists measure things. It’s all about their own definition.

“The National Bureau of Economic Research (NBER) Business Cycle Dating Committee (is) the official recession scorekeeper,” the White House Council of Economic Advisers lectured hurting Americans in a blog on the White House’s website. NBER “defines a recession as ‘a significant decline in economic activity that is spread across the economy and that lasts more than a few months,’” and “there are no fixed rules or thresholds that trigger a determination of” a recession.

The Biden administration has also tried to highlight the few “good” economic points. Biden pointed out the low unemployment rate — without addressing the labor shortage.

Biden officials even tried to tout the slow decline in sky-high gas prices. A member of Biden’s Council of Economic Advisers named Jared Bernstein told CNN that, while there’s bad economic news, “there’s also positive news that we should not overlook. I mean, the price at the pump is now $4.30 a gallon.”

“There’s also positive news that we should not overlook. I mean, the price at the pump is now $4.30 a gallon.” pic.twitter.com/15HCCUejB7

“Technical” or not, Americans are feeling the pressure, as year-over-year inflation hit a four-decade high of 9.1 percent and energy prices have caused pain at the pump.

The technical definition of recession is not only irrelevant to the middle class; a renowned economist says there’s an iron-clad reason why it’s probably just a matter of time before the NBER declares this a recession.

Economist Michael Strain of the American Enterprise Institute posted a chart of the U.S. economy going back before 1950—covering roughly all of President Biden’s long and storied life.

“Question: Out of the past 10 times the U.S. economy has experienced two consecutive quarters of negative economic growth, how many times was a recession officially declared?” he ask. “Answer: 10.”

Question: Out of the past 10 times the U.S. economy has experienced two consecutive quarters of negative economic growth, how many times was a recession officially declared?

Some of Biden’s detractors say this is just another facet of the Democratic Party being unable to tell the truth. Christina Pushaw, press secretary for Florida Governor Ron DeSantis, listed “just a few words that liberals have redefined.”

Maybe they also will try to redefine “landslide” and “loss” after the 2022 midterms.