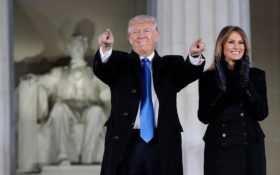 President Donald Trump has started to drain the swamp in Washington, D.C. — and it’s working.

Trump’s efforts to reduce government spending caused to a huge $184 billion April budget surplus, the size of which surprised economists.

In fact, the news is so positive — and reflects so well on Trump — the mainstream media is barely touching the story.

According to the Treasury Department’s monthly budget report, the federal government ran the second highest monthly surplus on record last month. Additionally, the surplus is bigger than any recorded during President Barack Obama’s two-terms.

The surplus is based in part on reduced spending that’s directly attributable to the Trump administration.  Through the first seven months of the current budget year, the government is running a deficit of $344.4 billion, down 2.4 percent from the same period a year ago.

Economists also attribute the April surplus on higher tax revenues, which were pushed up by a change in the deadline for corporate tax payments.

In its monthly budget report, the Treasury Department said Wednesday that the surplus for April totaled $182.4 billion, the second largest surplus after a record $189.8 billion surplus set in April 2001.

The government generally runs surpluses in April reflecting the annual tax deadlines. This year’s surplus was inflated because of spending reductions and a deadline change that allowed corporations until April to make their final tax payments for last year.

The Congressional Budget Office is projecting that the deficit for the full budget year, which ends on Sept. 30, will decline 4.6 percent to $559 billion. That’s $26.6 billion less than Obama spent last year.

The news could get even better, economists says. The CBO’s deficit estimate is based on current law remaining unchanged. Trump has called for further reductions in government spending, meaning the deficit could run even lower at the end of the year.