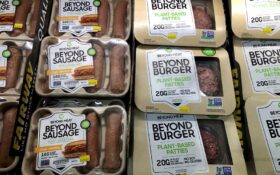 Plant-based meat maker Beyond Meat said its revenue fell 22.5% in the third quarter as it cut prices in the face of weaker demand.

The El Segundo, California-based company reported net revenue of $82.5 million for the July-September period. That was far lower than the $93.6 million Wall Street had forecast, according to analysts polled by FactSet.

Beyond Meat shares fell to a 52-week low of $11.56 before closing at $11.82 on Wednesday. They continued to fall in after-market trading after Beyond Meat released its third quarter results.

Beyond Meat President and CEO Ethan Brown said consumers have been switching to cheaper proteins like chicken because of high inflation. That hurts demand for products like Beyond burgers, which cost about $2 more per pound than lean beef ones.

At the same time, Brown said, more companies have been entering the plant-based market, leaving them fighting over dwindling sales.

“The current economic environment has not been kind to plant-based meat,” Brown said during a conference call with investors.

But Brown said Beyond Meat is also focusing on turning around its own business. The company has reduced operating expenses by 23% since the first quarter and has laid off 240 people — or more than 20% of its global workforce — since August.

Brown said Beyond Meat plans to pare its partnerships to its most profitable ones and sharpen its marketing to promote health benefits to older customers and environmental benefits to younger ones. Core products like burgers and sausage are getting refreshes.

The company is also reducing inventory and redistributing its manufacturing to make better use of its facilities, Brown said. He reiterated Beyond Meat’s goal of achieving positive cash flow in its operations by the second half of next year.

“It’s a pivot from ‘growth above all’ to ‘cash flow positive and sustainable growth,’” he said.

The company’s net loss nearly doubled to $101.7 million for the quarter. The loss, of $1.60 per share, was also higher than the $1.15 per-share loss analysts had forecast.