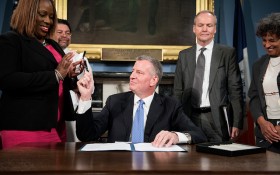 After a Legionnaires’ outbreak that left a dozen people dead, New York City is finally making property owners prove that their buildings aren’t crawling with the deadly disease.

The towers emanate warm mist that can spread the legionella bacteria. They are believed to be the source of the outbreak, the largest in the city’s history.

An outbreak that began last month killed 12 people in the Bronx and hospitalized more than 100 others.

The legislation was a joint effort between the mayor’s office, Gov. Andrew Cuomo’s office and the New York City Council.

Building owners have 30 days to register their towers.

Those who do not register or who fail to clean their towers are subject to fines and misdemeanor charges.