Beto O'Rourke doubles down after heckling incident - The Horn News 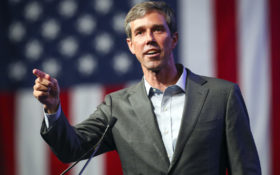 Texas Democrat Beto O’Rourke — a former congressman known for losing a 2018 Senate race against Republican Ted Cruz — responded to a heckler at a campaign stop.

O’Rourke heard a cackled laugh while criticizing the ease with which the Uvalde elementary school gunman legally purchased an AR-15-style rifle… and he gave an explicit response.

By Thursday, video of O’Rourke’s exchange at a town hall in rural Mineral Wells had drawn millions of views on social media, becoming the latest instance in which O’Rourke has gotten attention for his calls for stricter gun laws following one of the deadliest classroom shootings in U.S. history.

“It may be funny to you motherfucker, but it’s not funny to me,” Beto O’Rourke said when someone laughed while he described the mass shooting in Uvalde pic.twitter.com/Q0oBr2rnVv

Due to his rousing speeches and his frequent swearing, O’Rourke has become the subject of an internet caricature. “All he does is stand on things and provide empty platitudes with the occasional swear word, to be popular,” one critic said in 2019 during O’Rourke’s vanity run for president.

While running for president, O’Rourke infamously said at a debate, “Hell yes, we’re gonna take your AR-15.” He has sought to give a more moderated message on firearms during his current run for governor in gun-friendly Texas.

On Wednesday, O’Rourke was railing against how the 18-year-old gunman in Uvalde was able to legally purchase a weapon “originally designed for use on the battlefields” and take it into a classroom of fourth-graders. When a person in the crowd laughed, O’Rourke paused and pointed in their direction.

Supporters stood up and cheered. Video shows a small number of people in the crowd were holding signs for Republican Gov. Greg Abbott, O’Rourke’s opponent in November, though it does not show who O’Rourke was specifically addressing.

O’Rourke has heckled Abbott himself before. In May, he interrupted a news conference led by Abbott in Uvalde after the shooting, and he accused the two-term governor of failing to take action.

In a viral video, O’Rourke spoke in front of Abbott to call Abbott’s response “predictable.”

Nineteen children and two teachers were killed in the May massacre at Uvalde.

O’Rourke has prioritized gun control as a candidate. He has called for raising the age to legally purchase AR-style and other such high-powered guns in the U.S. to 21 years old.