Beto O'Rourke bets big on this shakeup - The Horn News 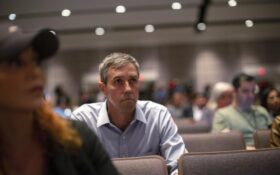 In 2019, former Rep. Beto O’Rourke, D-Texas, was running for president, and he made himself a symbol of firearm confiscation. He said in a televised debate, “Hell, yes, we’re gonna take your AR-15.”

O’Rourke is now campaigning for governor of Texas… and he’s raising the salience of this issue yet again.

He already crashed the news conference of the man he wants to unseat, Republican Gov. Greg Abbott, and declaring — in a moment subsequently viewed widely online — that the Uvalde massacre was “on you.”

Since then, O’Rourke has continued on this path.

O’Rourke is betting that the tragedy can reset the governor’s race in America’s largest red state — despite Abbott twice previously winning election by landslides and having begun the campaign with $55 million in the bank and despite gun ownership looming larger in Texas than perhaps anywhere else.

It didn’t work in 2019. O’Rourke’s debate declaration won him praise from other Democrats on stage and a fundraising bump. But he dropped out of the race barely six weeks later.

It’s too early to tell what will happen in the governor’s race, but the shooting has already affected both parties. Abbott canceled his planned visit to the annual National Rifle Association meeting to remain in Uvalde. Also skipping it was Republican Texas Sen. John Cornyn, who is among those negotiating with Democratic colleagues on strengthening background checks and “red flag” laws allowing authorities to remove firearms from those determined to be a danger to themselves or others.

On Monday, President Joe Biden even expressed some optimism about working with Cornyn on a hypothetical compromise for gun safety.

O’Rourke spent two nights in Uvalde after the shooting, then headed to Houston for a rally against gun violence outside Friday’s meeting of the NRA.

“To those men and women in positions of power who care more about your power than using that power to save the lives of those that you are supposed to serve …. we will defeat you and we will overcome you,” O’Rourke told protesters who chanted his name and the phrase “Vote them out!

In 2018, O’Rourke received more out-of-state cash from ActBlue than any other candidate, according to an analysis by FiveThirtyEight.

At the time, Cruz slammed O’Rourke as a mere fundraising machine for the Democratic National Committee.

Tens of millions flooding into Texas from liberals all over the country…. It’s a good thing Hollywood leftists can’t vote in Texas! #DontCaliforniaMyTexas https://t.co/dITfCckWZ1

Since then, O’Rourke’s momentum has fizzled. He ended his presidential campaign more than a year before the election, former President Donald Trump won Texas by a comfortable margin in 2020.

That year, Democrats who had hoped to flip scores of congressional and legislative seats in the state lost nearly every top race. In Texas, there are 27 officials who are elected statewide. All 27 offices are now occupied by Republicans.

A Democrat hasn’t won Texas’ governorship since 1990, and, just last year, the state loosened firearm restrictions enough to allow virtually any resident age 21 and older to carry guns without a license. Abbott signed that law alongside NRA CEO Wayne LaPierre and the group’s president, Carolyn Meadows.

Of course, the domination of guns in Texas has long predated the law. Abbott once tweeted his embarrassment at his state lagging California in gun sales, and Cruz is fond of saying, “Give me a horse, a gun and an open plain, and we can conquer the world.” Former Republican Gov. Rick Perry cruised to reelection in 2010 after using a laser-sighted handgun to kill a coyote while jogging.

Former Texas Land Commissioner Jerry Patterson, a Republican long famous for carrying multiple guns nearly everywhere, said O’Rourke’s most ardent supporters will be “even more determined to vote for Beto” after his confrontation with Abbott.

“Sometimes your method overwhelms your message, and his method gutted whatever benefit he might have accrued,” said Patterson, who, as a state senator, wrote Texas’ original, 1995 concealed handgun law. “I think it’s a net loss.”

Abbott hasn’t mentioned O’Rourke much since the shooting but answered questions about possible new state gun limits by slamming the crime rates in cities primarily run by Democrats.

Abbott’s campaign has also previously chided O’Rourke for his previous stand on guns, producing an online ad last year showing a cartoon of O’Rourke speeding the wrong direction down a one-way street, then off a cliff while the radio plays clips of his “Hell yes” comment and other very extreme positions he took as a presidential candidate.

The Democrat’s campaign transformed its fundraising apparatus into one accepting donations for relatives of those killed in Uvalde, and says O’Rourke attended the Abbott news conference at the urging of one of the victims’ families.

He sat quietly in the audience for 10-plus minutes, intending only to listen, the campaign said. But, when Abbott said “there was no meaningful forewarning of this crime” other than the gunman posting about the shooting just moments before he began doing so, O’Rourke got angry. He approached the stage and accused Abbott of “doing nothing” when the the Uvalde violence had been “totally predictable.”

Also on stage was Uvalde Mayor Don McLaughlin, who responded with an obscenity and called O’Rourke “sick” for trying to make the shooing “a political issue.”

But it nonetheless helped one Texan change her mind. Nicole Armijo, who works in her family’s HVAC business in the border city of McAllen and has three kids, ages 10, 9 and 6, attending public school.

She told the Associated Press that she didn’t vote for O’Rourke during his Senate run. However, she plans to vote for him now because “the way we’re doing things is not working.”

“Maybe, Texas, it’s not just about having a gun,” said Armijo, who said she loves guns and hunting but would support expanded background checks. “Beto’s kind of portrayed those thoughts: It’s not about me or you. It’s about everyone as a whole.”