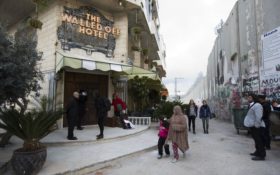 President Donald Trump’s recognition of Jerusalem as Israel’s capital looms large in Christmas festivities this year in the traditional birthplace of Jesus.

Some food vendors, sellers of holiday trinkets and a leading hotelier in biblical Bethlehem say Palestinian protests, triggered by what many here view as a provocative show of pro-Israel bias, have hurt their Christmas business.

Yet Bethlehem also offers a stage for a Palestinian rebuttal: banners proclaiming Jerusalem as the eternal capital of Palestine have been draped over facades on Manger Square as a backdrop for Christmas TV broadcasts to a global audience.

The Israeli-Palestinian conflict is keenly felt — perhaps even more so at Christmas — in Bethlehem, just a few miles (kilometers) south of contested Jerusalem.

Israel’s West Bank separation barrier cuts into Bethlehem and a segment of it has become a tourist magnet in its own right. Its cement slabs are covered with works by international graffiti artists such as Banksy and pro-Palestinian slogans left by visitors.

While Palestinians try to draw attention to the barrier when foreigners pour in for Christmas, Trump’s policy shift on Jerusalem two weeks ago has emerged as the dominant theme this year. It went against an international consensus that the fate of the city should be determined in negotiations. Israeli-annexed east Jerusalem houses major Muslim, Jewish and Christian shrines, and Palestinians seek it as a future capital.

Trump’s declaration triggered clashes in the Palestinian territories between stone-throwers and Israeli soldiers who fired tear gas, rubber bullets and live ammunition. Eight Palestinians were killed by Israeli fire, most on the Gaza border, and scores were wounded.

In Bethlehem, the fallout was felt immediately.

Palestinian President Mahmoud Abbas was to have received Vice President Mike Pence, a devout Christian, in Bethlehem, but canceled after the U.S. pivot on Jerusalem. The snub came as Abbas shifted from cooperating with the United States to rejecting Washington as a Mideast broker.

General manager Marwan Kittani said the hotel had been fully booked for Christmas, but that he is now assessing day by day if he can reopen.

In Manger Square, next to the Church of the Nativity built over Jesus’ traditional birth grotto, some merchants blamed Trump for a drop in business.

Mahmoud Salahat, who sells pomegranate juice on the square, said his main source of income — Palestinian citizens of Israel — largely stayed away from Bethlehem during the past two weeks, apparently fearing trouble on the roads.

The Christmas season caps a banner year for tourism in the Palestinian territories, with 2.7 million visitors in 2017, compared to 2.3 million in 2016, said Tourism Ministry official Jiries Qumsieh. Despite some cancelations, Bethlehem’s 4,000 hotel rooms were more than 90 percent booked for Christmas, he said.

Christmas also offers an annual opportunity for Abbas to court international sympathy for long-standing Palestinian demands for statehood in the West Bank, Gaza Strip and east Jerusalem, lands Israel captured in 1967. Abbas rival Hamas, an Islamic militant group that dominates Gaza, seeks a state in all of historic Palestine, including what is now Israel.

The vast majority of Palestinians are Muslims, but Abbas — like the late Yasser Arafat before him — values close ties with the Christian minority, regularly attending Christmas Eve mass at the Church of the Nativity, which is broadcast live.

This year, TV footage will likely show two large banners hanging from roofs in Manger Square, reading: “Jerusalem will always be the eternal capital of Palestine.”

Activists also plan to circulate a petition to Christmas visitors in support of Palestinian claims to Jerusalem and distribute stickers reading: “We (heart) Jerusalem, the capital of Palestine,” said organizer Munther Amira.

The protesters the held the candles to the photos and burned them.

Amira said it was a protest against U.S. policy, not the American people.

Some tourists seem baffled by the politics and are mainly drawn to the Nativity basilica, currently under renovation and partly covered by scaffolding.

German pilgrim Ludmilla Trifl said she reserves judgment because she doesn’t know enough about the conflict.

The separation barrier at the entrance to Bethlehem “does not look good, she said, adding that she’s also heard it described as a security measure. Israel says the barrier is to keep out Palestinian militants, while Palestinians call it a land grab.

Along the barrier, a different type of tourism has emerged.

The area around the Walled-Off Hotel, a Banksy-linked guesthouse that opened in March, has become a center for political street art. A recent wall piece said to have been created by Banksy shows two angels, one with a crowbar, on either side of a gap between cement slabs, each trying to widening the opening.

A nearby shop called “Wall-Mart” offers stencils and spray paint — with prices for slogan sizes ranging from $14 to $26 — to help visitors to leave their mark.

On a recent morning, Australian Farzanah Fazli shook spray cans, filling in a stencil she had taped to the wall. Slowly, the words “Once upon a time, there was humanity” emerged — meant to express her view that Israeli policies have dehumanized the Palestinians.

Fazli, 30, a London-based accountant, said leaving that message was the highlight of her Middle East trip, even if it is eventually painted over by others.

“Back in the day, it was the creepy street” she said. Now, “the street is alive, art everywhere.”