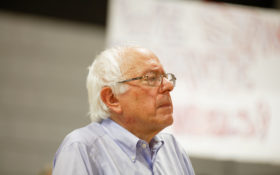 Sen. Bernie Sanders, I-V.T. is having a rough week — and it just got much, much worse.

He was accused by fellow progressive Sen. Elizabeth Warren, D-M.A. earlier this week of sexism. Warren claimed Sanders told her that a woman couldn’t beat President Donald Trump — a serious political sin among the far-left.

But it was his campaign field organizer’s words that landed Sanders in serious trouble.

A series of videos were first released exposing the disturbing reality inside Sander’s presidential campaign.

Jurek said he admired former Soviet Union dictator Joseph Stalin’s gulags — prison camps that killed millions of political prisoners in the USSR — and said Trump voters should be sent to the “re-education” camps.

“There’s a reason Joseph Stalin had gulags, right?” he asked rhetorically. “And actually, gulags were a lot better than what the CIA has told us that they were.”

“People were actually paid a living wage in gulags”#Expose2020 pic.twitter.com/I2QvZoyWP9

He suggested that Sanders supporters would attack the police if things didn’t go their way in the 2020 election.

“The cops are gonna be the ones that are getting f*cking beaten in Milwaukee”#Expose2020 pic.twitter.com/AVYAt24z7d

He promised Sanders supporters planned to riot and send Milwaukee up in flames.

“If Bernie doesn’t get the nomination or it goes to a second round at the DNC convention, f***ing Milwaukee will burn,” Jurek is seen on video saying.

“It’ll start in Milwaukee and then when they F***ing, when the police push back on that, other cities will just fucking burn.”

He also says this violence will spread to other cities when police push back.

The undercover journalist asked Jurek if he thought that Trump supporters could be “re-educated.”

Jurek compared Trump voters to Nazis and said conservatives needed to be deprogrammed in re-education camps:

“… in Nazi Germany after the fall of the Nazi party, there was a shit ton of the population that was f***ing Nazi-fied. Germany had to spend billions of dollars re-educating their f***ing people, to not be Nazis. We’re probably going to have to do the same f***ing thing here. That’s kind of what all Bernie’s whole f***ing thing like, ‘hey, free education!’ For everyone, because we’re going to have to teach you to not be a f***ing Nazi.”

BREAKING: @BernieSanders “free education” policies to “teach you how to not be a f**king nazi.”; 'There is a reason Stalin had Gulags'; 'Expect violent reaction' for speech. If Bernie doesn't get nomination "Milwaukee will burn"