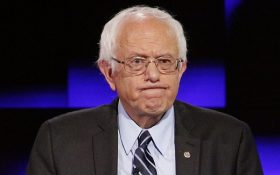 The watchdog group Common Cause filed a complaint with the Federal Election Commission on Wednesday, alleging that Our Revolution, a political nonprofit organization founded by Sen. Bernie Sanders, I-V.T., violated campaign finance law by accepting donations in excess of federal limits while boosting his White House ambitions.

Our Revolution has denied any wrongdoing. A spokesman declined to comment. Sanders’ campaign also did not respond to a request for comment.

The campaign finance act says groups established by federal officeholders or candidates cannot raise money for federal electoral activity that exceeds the limitations of the law. Those contributions are currently set at $2,800 for candidates and $5,000 for political action committees.

Our Revolution has taken in nearly $1 million from donors whose donations exceeded those limits and whose identities it hasn’t fully disclosed, according to tax filings for 2016, 2017 and 2018. Much of it came from donors who contributed six-figure sums.

The group has paid for some social media ads backing Sanders’ campaign and is working to turn out voters who will support the senator in the Democratic presidential primary. The group will not have to disclose its 2020 spending until after the election.

“Because Sanders set up Our Revolution and they have raised and spent money in candidate elections, Our Revolution is required to comply with contribution limits, register with the FEC and discloses its donors — but it hasn’t,” said Paul S. Ryan, an attorney for Common Cause. “It’s his establishment of the group that triggers these laws. That means a $5,000 limit, full donor disclosure and no contributions from prohibited sources.”

Candidates are barred from accepting contributions from corporations, labor unions, federal contractors and foreign nationals. The group does not fully disclose who its contributors are.

For years, Sanders has railed against the torrent of money allowed to flood the political system in the wake of the Supreme Court’s landmark 2010 Citizens United decision. But he has saved special ire for super political action committee, or super PACs.

Our Revolution is not a super PAC. But the tax-exempt political nonprofit functions much like one — but without having to reveal its donors. Like super PACs, these nonprofits were similarly empowered to raise and spend unlimited sums after the Citizens United decision.

But such groups must take steps to keep their activities separate from the candidates they support.

It’s far from clear if the FEC, which enforces campaign finance laws, will take action. After a recent resignation, the commission does not currently have enough members to legally meet.

“I believe that the analysis is more complicated than has been suggested, and that Our Revolution will be able to show Sanders is no longer affiliated,” said Dan Petalas, a former FEC attorney now in private practice who previously represented the group. “And even if that’s incorrect, Our Revolution should be able to demonstrate that they used the money in ways that comply with the law.”

Sanders on Sunday sought to distance himself from Our Revolution during a candidate forum with New Hampshire Public Radio. While he acknowledged that he founded the group and had “no apologies for that,” he also suggested he was legally prevented telling them to stop.

“If I got on the phone and I told them what to do, that would be a violation of campaign finance law,” Sanders said, falsely.

Legal experts say there’s nothing preventing him from asking them to stop.

“It’s dubious,” said Adav Noti, a former FEC lawyer who now works for the nonpartisan Campaign Legal Center in Washington. “A full disavowal — ‘I do not want an outside group spending money from secret, wealthy donors to support my election’ — there’s nothing in the law that would prohibit a candidate from saying that.”

Sanders founded Our Revolution to continue his support after his unsuccessful 2016 campaign for the Democratic presidential nomination, though Our Revolution leaders say he hasn’t held a formal role since its first governing board was appointed in 2016.

The group, which also includes hundreds of local affiliates across the U.S., initially backed a series of candidates in Sanders’ mold during the 2018 midterms. But after he entered the 2020 contest, its focus has shifted toward him.

Nina Turner, a former Ohio state senator and a co-chair of Sanders’ campaign, was president of the group until she took a leave of absence to work on his presidential bid. In May, she resigned from the role, which paid her $187,000 in 2018. Other Sanders surrogates, including radio commentator Jim Hightower and Palestinian rights activist Jim Zogby, have also collected eyewatering salaries while working on the board.

There are other shady connections, too, between Our Revolution and Sanders’ insiders.

Sanders’ wife, Jane O’Meara Sanders, was a founding director of Our Revolution, according to business filings. Jane Sanders has been investigated by the FBI for her involvement in the bankruptcy of a Vermont College over suspect land deals and building loans.

Our Revolution also provided a $105,000 seed loan to the Sanders Institute, a think tank founded by O’Meara Sanders and her son, David Driscoll. The Sanders Institute, which was closed after Sanders launched his 2020 campaign, paid Driscoll $100,000 a year to serve as its executive director. Driscoll had no previous nonprofit experience, according to his LinkedIn profile.

While Our Revolution doesn’t fully disclose donors, it does list many of them on its website, though they do not include donation amounts. They do grant anonymity, however, to donors who don’t want to reveal their identity.

Still, other tax filings and FEC records reveal who some of the top contributors are.

National Nurses United for Patient Protection, a super PAC that supported Sanders’ 2016 run, disclosed in a 2016 that it donated $300,000 to Our Revolution.

Sixteen Thirty Fund, a group that allows rich donors to anonymously funnel large contributions to progressive and liberal causes, was the source of a $100,000 contribution in 2017.