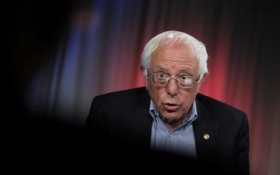 If Sen. Bernie Sanders, I-V.T. was the little engine that could, it seems his freight car is running on fumes.

Sanders losing the 2020 Democratic primary to former Vice President Joe Biden — and now his far-left campaign is facing a racial discrimination lawsuit from their own former volunteers.

Tezlyn Figaro, a former campaign staffer for Sanders in 2016, is suing the pro-Sanders group, Our Revolution.

She claims that she was fired for providing too many solutions for African-American outreach, an area that Sanders’ campaign is sorely lacking. Figaro says Bernie and company scoffed at her plans — and buried her work.

Figaro says she and other African-Americans experienced repeated discrimination from Democrats working on Sanders campaign.

“It’s turned my stomach,” she said. “For three years there has been consistent concerns, my colleagues have come forward, not just me, in print in the New York Times about issues of racism within the Bernie Sanders movement.”

“Even as recently as last night people were concerned that no black people were in the audience at Birmingham, Alabama, with a population of over 71 percent black,” she pointed out.

What Figaro was referring to was the reaction that many social media critics had in response to a Sanders rally in the southern city, where there seemed to be zero African-Americans in the crowd.

There is. In Alabama. It’s population is 3/4 black yet this crowd is overwhelmingly white. That’s what she’s getting at. (And it looks more like Birmingham England).

Sponsored: Biblical DNA – do you have it?

During outreach events, black voters have booed him. They bemoan his soapbox rambling about the civil rights era. And Figaro suggests that Sanders’ old campaign problems are only going to get worse — she says noone from his 2016 campaign has returned to work with him.

“It is a reason why no one from the 2016 black outreach department is there working for Senator Sanders.”

As a candidate, your campaign reflects your voters.

And it seems that now Bernie is feeling his own “Bern.”