Bernie Sanders SHAKES WITH RAGE after being heckled onstage...(wow) - The Horn News 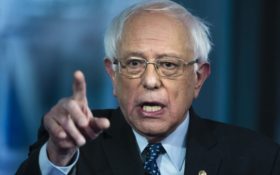 Sen. Bernie Sanders, I-V.T., is an infamous know-it-all who takes great pleasure in lecturing and heckling his opponents.

But it was recently Sanders’ turn to be heckled… and it wasn’t pretty.

The self-proclaimed civil rights trailblazer actually received a crowd-full of boos and heckles at a forum which discussed issues faced by women of color.

The catastrophe began when an audience member asked Sanders what specific actions he was going to take to fight the violence of white supremacy groups.

He tried to rest on his laurels by mentioning his so-called civil rights legacy more than fifty years ago.

The audience members quickly shut him down with embarrassing jeers. Groans of “we know!” echoed through the auditorium.

Sanders paused a moment with his finger in the air, a blatant show of disrespect, before the two moderators had to jump in and drag him out of the metaphorical mud.

But there was no saving the meltdown.

He tried to flaunt his connection with Jesse Jackson before turtling into the usual Democratic defense mechanism — promising handouts to try spellbinding the audience. It was as if he was trying to dangle shiny, fake gold in front of the crowd.

And they didn’t fall for it…

The women in the crowd were FURIOUS. They continued to talk over what he had to say about his campaign efforts, adding more scrutiny to Sanders’ White House House run.

Bernie has been badly unpopular with African American voters, with Hillary Clinton getting more votes than him in 2016, and it looks as though Sanders hasn’t taken any steps to evolve his message.

His story about his civil rights march is falling on deaf ears and is being turned into a meaningless walk in the park, because he’s abused it. And he’s treating his potential voters like they’re dumb by massaging the same old message into their bones.

Trying to argue that President Donald Trump and his administration are racist isn’t going to do the trick. Neither is the promise that “15 bucks an hour” is going to somehow solve white supremacy violence.

His old message three years ago was “Feel the Bern.”

Now, ever since the socialist has become a millionaire, it seems a new slogan is fitting.

Watch the entire meltdown below: