Bernie Sanders BUSTED when he said... WHAT!? - The Horn News 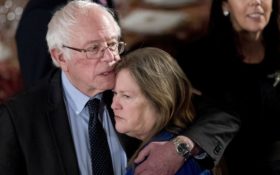 Sen. Bernie Sanders, I-V.T., demanded Monday that Disney use its box office-breaking film, “Avengers: Endgame,” to pay all of its workers more money.

And critics pounced immediately. Sanders, after all, makes millions of dollars a year selling books — and gives hardly any of his own money to charity.

What would be truly heroic is if Disney used its profits from Avengers to pay all of its workers a middle class wage, instead of paying its CEO Bob Iger $65.6 million – over 1,400 times as much as the average worker at Disney makes. https://t.co/NrcFSk4LZc

Using his political popularity in recent years, Sanders just hit a new tax bracket with the sale of his books. He admitted earlier this month he was a multi-millionaire that owned three houses — and refused to apologize for it.

Since his rise to political stardom in 2016, Sanders published a book every year.

He kept almost every penny of the profits for himself. He didn’t redistribute a penny of his earnings to the working class people who published, edited and printed his book.

His titles, including “Our Revolution,” “Where We Go From Here: Two Years in the Resistance,” and “Bernie Sanders Guide to Political Revolution” all helped Sanders to become a millionaire many times over. He owns three houses and flies private jets all over the country.

Two of those books were published by Macmillan Publishers, headquartered in New York City where a normal salary ranges from $50,245 to $150,736, according to Business Insider.

The publishing house has an entire team, just like any movie. That team works on every step involved with writing, putting a book together, marketing it, and selling it.

According to Glassdoor, a job database for employers and employees, many of the positions at Macmillan Publishers don’t even crack the average middle-class wage in New York City.

A few initial estimated salaries of careers working for Macmillan — whose sweat and labor went into making Sanders a multi-millionaire:

Living in New York City, some of those salaries are considered near the poverty level.

So where was Sanders’ when the people who put their time into the book weren’t making a middle-class wage?

He wasn’t giving the money away, that’s for sure! He gave less than $36,000 to charity the year he pocketed a million in book sales — and $25,000 of that was given to starting a nonprofit run by his step-son that soon closed down.

It’s always the same for the radical left — Rules for thee, but not for me.