Bernie Sanders “lawyers up” in fraud investigation - The Horn News 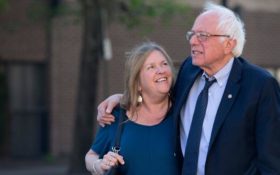 Senator Bernie Sanders and his wife Jane are clearly worried about an upcoming fraud investigation, because they just hired two big shot lawyers and are preparing to fight serious fraud allegations.

The FBI is probing the political couple — both are outspoken socialists — after Jane applied for a massive loan while president at Burlington College… a loan she was likely aware the school couldn’t pay back.

According to reports, Jane allegedly filed for the $10 million loan in 2010 that she planned to use to purchase 33 acres of land for the school.

She is now accused of altering the amount of funds expected from donors on the loan application she filed to People’s United Bank, in order to convince the bank that the school would be able to repay the loan.

Burlington College went bankrupt and closed for good in 2016.

But it goes further then Jane.

Politico reported that federal prosecutors are also looking into allegations that Bernie Sanders’ office abused their political power in an attempt to get the bank to approve the loan.

The attorneys’ hiring was confirmed by CBS News by Jeff Weave, who served as Bernie’s campaign manager during his race against Hillary Clinton in the 2016 primaries.

According to Politico, Rich Cassidy “is a well-connected Burlington attorney and Sanders devotee,” and Larry Robbins is a “renowned Washington-based defense attorney who has represented I. Lewis ‘Scooter’ Libby and disgraced former Rep. Bill Jefferson.”

Bernie has dismissed the investigation as “nonsense” and blamed his wife’s alleged fraud on none other than President Donald Trump.

Toensing told Politico, “The investigation was started more than a year ago under President Obama, his Attorney General Loretta Lynch, and his United States Attorney, all of whom are Democrats.”

While Sanders suspiciously throws blame to anyone other than himself or Jane, only the FBI can truly decide if he is guilty.

Should Bernie and Jane Sanders go to jail!?