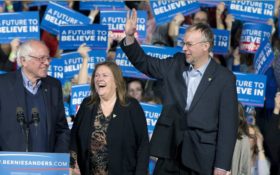 Levi Sanders is joining seven other Democrats and three Republicans in this year’s race for the seat now held by Democratic Rep. Carol Shea-Porter, who is stepping down after her term ends.

“This is a unique opportunity to listen to the hard-working men and women of New Hampshire about the issues that matter to them,” Sanders said in a statement announcing his bid.

Sanders, a 48-year-old legal services analyst in Massachusetts who has lived in New Hampshire for 15 years, is the latest relative of the 2016 presidential contender and independent Vermont senator to announce a bid for public office. Levi Sanders’ step-sister, Carina Driscoll, is running for mayor of Burlington, Vermont, a post held by Bernie Sanders four decades ago.

In announcing his bid, Levi Sanders said he is proposing “Medicare For All” health care system, a higher minimum wage, “sensible gun legislation” and tuition-free college. He also vowed to fight the opioid crisis.

Many of the positions put forward by Sanders are similar to his father, a self-described socialist who campaigned for a single player health care system and free tuition at public universities during his bid for the Democratic presidential nomination in 2016.

Sanders is running for a seat in New Hampshire’s 1st Congressional District, which spans from oceanfront towns into the White Mountains and includes the state’s largest city, Manchester. He lives in in Claremont, in the state’s other congressional district. The U.S. Constitution requires only that U.S. House members reside in the state they serve, not necessarily in the same district.

His announcement was quickly panned by one of the top Republicans in the race, Sen. Andy Sanborn, of Bedford. In a statement, Sanborn called Sanders an “out-of-district socialist” whose views conflict with those of New Hampshire voters.

“I am appalled, but not surprised, Bernie Sanders is sending his socialist son here to dismantle our state motto,” Sanborn said. “We are a state that believes in personal freedom, personal liberty, and individual rights, yet Sanders’ socialist views look to turn New Hampshire residents into government-controlled zombies, where you lose the right to think for yourself, act for yourself and live free.”