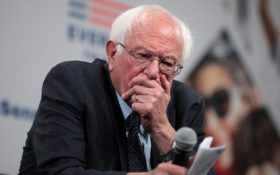 Self-declared socialist Sen. Bernie Sanders, I-Vt., angered both parties on Sunday… but especially his own.

Sanders expressed agreement with the Republican critiques of the Democrats’ $669 billion “Inflation Reduction Act.” He even tried to amend the bill.

Of course, he ended up voting for bill, anyway, despite both his own misgivings and the overwhelming opposition from Republicans.

On the Senate floor, Sanders criticized “the so-called Inflation Reduction Act” for its “minimal” impact on inflation. He cited an analysis from the Congressional Budget Office to back up his argument.

“Bernie Sanders confirmed today that he is one of the worst Democrats in the Senate,” a fan account for Vice President Kamala Harris wrote on Twitter. “Absolutely unnecessary comments from him.”

Sanders didn’t stop there. He introduced an Inflation Reduction Act Amendment to require Medicare to pay the same lower prescription drug prices paid by the Department of Veterans Affairs.

The Democrats weren’t having it.

The Senate has 50 Democrats and 50 Republicans… and the chamber voted 99-1 against the Sanders amendment.

Even Sen. Elizabeth Warren, D-Mass., voted against it. Only Sanders voted for it.

Sanders followed up with another amendment. This time, he tried to amend the bill to revive the Child Tax Credit for four years.

Some senators — like Sen. Sherrod Brown, D-Ohio — agreed with Sanders’ goals but criticized him for amending the bill. The Senate was already set to vote on one amendment after another all night, as part of a procedure called “vote-a-rama.”

Sanders became the only senator to vote for the Child Tax Credit amendment to the bill. 97 senators voted against it, and two abstained.

Still, Bernie won the support of some dead-enders and diehard fans.

In a now-deleted tweet, Turner also referred to Sanders as “the Budget Chairman appointed by Biden.” The chair of the Senate Budget Committee is, in fact, not appointed by the president.

Vice President Kamala Harris broke a 50-50 tie to pass the bill in the Senate and send it to the House.

Of course, Sanders eventually voted for the bill in the end, and Republicans remained unified in their opposition to it.

Still, some Republicans commended Bernie for questioning the disinflationary impact of the $669 bill.

“Even Sen. Bernie Sanders recognizes that the ‘so called Inflation Reduction Act’ will not reduce inflation,” one conservative user wrote.

The phrase “Even Bernie Sanders” was trending among Republicans on Twitter.

So, Bernie angered the Democrats by agreeing with the other side’s assessment of the bill… and by wasting time on amendments with no chance of passing.

There’s only one problem. The Republicans don’t want him, either.

BERNIE SANDERS: The “so-called Inflation Reduction Act…will, in fact, have a minimal impact on inflation.”pic.twitter.com/gE9H2cJIgg

Even Sen. Bernie Sanders recognizes that the “so called Inflation Reduction Act” will not reduce inflation. pic.twitter.com/EIOZ3u4vHq

The Senate is voting on Sanders amendment to reinstall the Biden child tax credit for 4 years, paid for with corp tax hike.

Sen. Sherrod Brown objects, though he technically supports it:

“The arrangement is that all 50 Democrats support this”