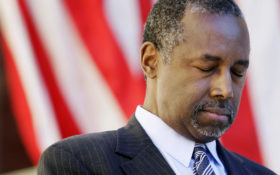 Housing and Urban Development Secretary Ben Carson was targeted by the alt-left, who vandalized his home in Virginia solely based on his support for President Donald Trump.

Carson posted to his shared Facebook page with his wife Candy, saying, “More recently, our home in Virginia along with that of a neighbor was vandalized by people who also wrote hateful rhetoric about President Trump. We were out of town, but other kind, embarrassed neighbors cleaned up most of the mess before we returned.”

His post also detailed the story of neighbors putting up American flags to counter the display of confederate ones, and how the best response to behavior you don’t agree with is the high road.

He ended the post by encouraging the America people to, “learn to be neighborly and get to know each other.”

It is unclear what exactly was written on his house.

Carson gave up a lucrative career as one of the world’s best brain surgeons to serve our country under Trump’s leadership. He voluntarily dedicates his time to making America great again, and the response of vandalism is in no way appropriate.

Following the horrific event of a car driving into a crowd of counter-protesters at a white nationalists protest of the removal of a confederate statue, then nation has been in a tense state.

Carson post is a civil attempt at drawing attention to the unnecessary violence, and encouraging Americans to engage in civil discourse rather than violence and hatred.