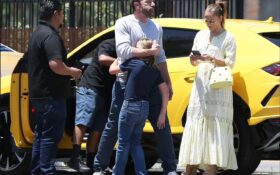 Hollywood filmmaker Ben Affleck grabbed headlines this weekend… but not for his role in the movies.

Affleck was shopping at a car dealership Sunday, and he watched his 10-year-old son bump a yellow Lamborghini into a white BMW.

“Ben was at the dealership to test drive a new car. [Affleck’s son] Sam seemed very interested in the exotic cars. Ben let him get into the driver’s seat of a very expensive Lamborghini, [and] the car ended up reversing into another parked car,” one source told People magazine.

“There seemed to be no damage to the cars though. You could tell that Ben very much regretted letting Sam get into the driver’s seat. He seemed upset about it.”

“There was no damage,” the representative told People. “Everyone is okay.”

The Affleck family appeared in viral photos after the incident. Affleck’s son appears to be inspecting the Lamborghini for marks. The entertainer Jennifer Lopez, the actor’s fiancee, is standing nearby, looking annoyed.

#BenAffleck’s 10-year-old son accidentally crashed a ₹3-crore Lamborghini, while he was out with Ben and #JenniferLopez at a luxury car dealership.#Hollywood pic.twitter.com/rKAw6UhuQo

#BenAffleck’s 10-year-old son accidentally crashed a ₹3-crore Lamborghini, while he was out with Ben and #JenniferLopez at a luxury car dealership.#Hollywood pic.twitter.com/rKAw6UhuQo

The luxury sportscar cost $1,475 per day to rent and $250,000 to buy, according to reports by People and the New York Post. It bumped into a BMW, another very expensive car.

Still, the dealership appears to have forgiven Affleck.

“We have a small lot and the cars are close,” an employee from the dealership, 777 Exotics in Los Angeles, told the NY Post. “When [Samuel] got into the car, it jerked back and forth,” he said.

The employee denied any ill will toward Affleck or his family.

“We hope they come in again,” the employee said. “Affleck loves cars.”

Affleck fathered three children, including Samuel, during his marriage to the actor Jennifer Garner.

He previously dated Lopez from 2002 to 2004. They rekindled their relationship last year, 17 years after breaking off their last engagement.

Affleck, 49, gained some publicity earlier this year for his history of speaking to Clinton Global Initiative, a project restarted in March by the Clinton Foundation.