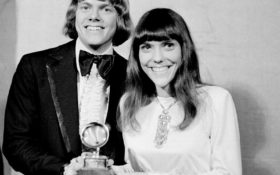 Karen Carpenter has now been gone longer than she was alive.

Yet her best work may have just been released, at least according to her brother, arranger and performing partner, Richard, who has made it his mission to keep her singing voice resonant and relevant since her death 35 years ago.

In the new collection, “Carpenters with the Royal Philharmonic Orchestra,” Richard Carpenter gave new string arrangements to many of the duo’s classic recordings from the late 1960s through the early 1980s, including “Close to You” and “Superstar,” and pushed his sister’s unmistakable voice even more to the fore than it already was.

“I think it’s the best album we’ve ever made,” Carpenter, 72, told The Associated Press in an interview at his Southern California home this week.

Longtime fans are enthused by the collection, which includes the holiday touch of “Merry Christmas Darling,” the December staple that Carpenter says was “one of our best records” regardless of season.

The album debuted at No. 52 on the Billboard charts in the U.S. after its Dec. 7 release by A&M/UMe and shot straight to the Top 10 in the United Kingdom and Japan, both Carpenters’ strongholds from the start. A vinyl release will follow in February.

Carpenter wasn’t immediately gung-ho when Universal Music asked if he wanted to create an album for the “Royal Philharmonic” series, whose previous editions have included Elvis Presley and Aretha Franklin.

But as he considered it, he realized he could make small changes to the duo’s already largely orchestral recordings that would make a big difference.

“It gave me a chance to change a couple of arrangements a certain way that I pretty much wanted to do for many a year,” he said. “They’re just either augmentations to already existing parts — just more players playing the parts — or different little things that I heard to an existing arrangement.”

Carpenter conducted the 80-piece London-based symphony himself at Abbey Road Studios, and he oversaw the mixing, giving him another chance to play his natural background role in support of the unforgettable alto voice of his sister, who died of complications from anorexia in 1983 at age 32.

“I feel Karen and I were born with talents to complement the other,” Carpenter said.

In some cases — like an angelic new piccolo trumpet solo on “Goodbye To Love” — his changes leap out to the listener. But most of them might even go unnoticed, and that was a deliberate choice.

“The last thing I wanted to do was overdo it,” Carpenter said.

He also got to fix old quirks, the result of having to rush out albums at the height of the group’s popularity.

“Some things were done in a bigger hurry than I would have preferred. There are certain little oddball things that made their way through. It’s small, but if you have the ear to hear it, you hear it. Like the air-conditioning rumble in the opening lines of ‘Yesterday Once More,’” Carpenter said. “All that’s gone now.”

He also took away some of the noise and reverb around his sister’s voice, and made her louder and clearer.

“I pushed her up even more in the mix than in the original,” he said. “And it was already pretty up there in the original. She sounds, of course, better than she ever did.”

The overall result is much more than a mere collection of singles, it’s a legitimate studio album, with newly composed overture, interludes and introductions, a carefully chosen sequence and songs that flow together.

“That’s how it’s meant to be listened to,” Carpenter said. “If a person has 66 minutes to set aside.”

The new versions are meant to be works in their own right, not to displace the old ones.

“I realize there are people who aren’t going to want anything, purists, and I understand,” Carpenter said, “but I thought about it, and I thought, ‘Well, if they don’t care for this, the originals are still out there.’”