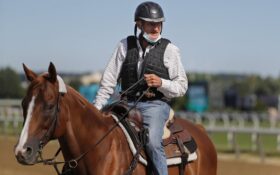 It wasn’t quite the post position trainer Barclay Tagg wanted for Tiz the Law. Still, it wasn’t far off for the colt who on Wednesday was made the early 6-5 favorite for the Belmont Stakes.

Tagg was hoping the Florida Derby winner would land anywhere between spots 5 to 7 in the starting gate for Saturday’s beginning of the reconfigured Triple Crown series. Tiz the Law drew the No. 8 post in the 10-horse field and will be ridden by Manny Franco.

“It could have been worse,” Tagg said from behind a mask worn to protect against the coronavirus pandemic that has upended the Triple Crown and pretty much every other sporting event this spring and summer. “He likes this track, so I’m glad to be back on it.”

Instead of concluding the Triple Crown, the Belmont is kicking off the series. It will be run at 1 1/8 miles — shorter than its usual grueling 1 1/2 miles — without spectators or owners at Belmont Park in New York.

“It’s going to be a far different scene for sure,” trainer Todd Pletcher, who has two entries, said this week. “It’s sad in some ways, but we’re grateful we’re getting an opportunity to run.”

The starting gate will be positioned in the far corner of the sprawling track with the horses looking at a run down the backside rather than breaking from in front of the grandstand when the race is 1 1/2 miles.

Tagg is trying to win the race that eluded him in 2003. Funny Cide, a New York-bred horse owned by Sackatoga Stable just like Tiz the Law, won the Kentucky Derby and Preakness to set up a Triple Crown bid in the Belmont that year. But the hugely popular Funny Cide finished third, beaten by Empire Maker, on a rainy day.

At 82, Tagg is back to try again with Tiz the Law, who brings the strongest resume to the race. He is the only colt in the field with a Grade 1 victory and actually has two: the Champagne and Florida Derby.

“He does everything we ask of him,” the trainer said. “We’re pleased with him.”

Sole Volante is the 9-2 second choice. Dr Post is the 5-1 third choice, and Tap It to Win is the 6-1 fourth choice. Pneumatic at 8-1 is the only other horse listed at single-digit odds. Five others are 15-1 or higher.

“There isn’t quite the star power we all expected,” said Jack Knowlton of Sackatoga Stable, which paid $110,000 for Tiz the Law.

Besides Dr Post, Pletcher is taking aim with Farmington Road, one of three 15-1 shots in the field.

Linda Rice will try to become the first woman to train a Belmont winner in the race’s 152-year history when she saddles 15-1 shot Max Player.

“They just haven’t given women enough time yet,” she said, jokingly.