China cracks down amid coronavirus super-flu epidemic - The Horn News 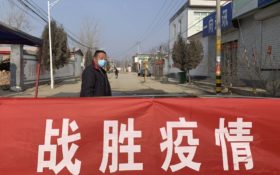 With barricades and wary guardians, villages on the outskirts of Beijing are closing themselves off to outsiders to ward against infection from a new type of virus.

Roads are being blocked by piles of earth or anything else capable of stopping traffic, red banners are tied overhead and serious-looking villagers wearing masks and red armbands stand guard to prevent outsiders and their vehicles from entering.

Those wishing to visit have to prove their presence is necessary and testify that they have not traveled to Wuhan, the epicenter of the virus, or other stricken areas.

“If we let in one (infected) person, the whole village would be ruined,” said Chen Shuyi, a member of the village committee in Zhuangke in Hebei province, which borders Beijing.

At the entrance to another village, Donggouhe, an electric screen displays a message from the local governing committee: “No gathering, no visiting, prevent infection.”

“We’ve made it very clear that people and cars from outside cannot get into the village,” said committee head Wang Huijin. “Hopefully this can protect our people and also this can help the country.”

Li Shulin, committee head of Datun village, said every similar-sized community in the region is employing the same tactics, and that this year’s Lunar New Year, which began last week, has a very different feel from previous years.

“People stopped paying new year visits. Most of them stayed at home,” he said.

The new type of coronavirus has killed 132 people and infected more than 6,000 on the mainland and abroad. The latest figures cover the previous 24 hours and add 26 to the number of deaths, 25 of which were in the central province of Hubei and its capital, Wuhan.

The 5,974 cases on the mainland marked a rise of 1,459 from the previous day, although that rise is a smaller increase than the 1,771 new cases reported on Monday. Dozens of infections have been confirmed abroad as well.

They’re also an extension of the strict travel bans and quarantines that the government is relying on to contain the virus.