The beginning of the end of Obamacare - The Horn News 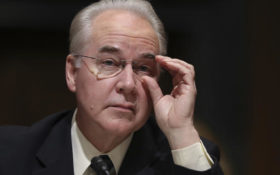 Another one of President Donald Trump’s Cabinet picks has been confirmed — and this one means MAJOR changes to America’s broken healthcare system.

Rep. Tom Price, President Donald Trump’s choice to be health secretary, is the latest of a handful of Cabinet nominees to eke out a confirmation victory in a bitterly divided Senate.

His arrival means the beginning of the end for Obamacare.

Price has supported ending federal payments to Planned Parenthood, and paring Medicaid and giving states more power to shape the health care program for the poor. He’d reshape Medicare’s guaranteed health coverage for the elderly into a program offering subsidies for people to buy policies.

Minority Democrats have used Senate rules, whenever possible, to delay elevation of some Trump nominees.

Democrats prolonged the debate on the 62-year-old Price until nearly 2 a.m. EST Friday, in arguments tinged with bitter accusations,.

No. 2 Senate GOP leader John Cornyn of Texas said Democrats’ “obstruction” of Cabinet nominees was a rejection of Trump’s Election Day victory and threatened “the stability of the government and that peaceful transition of power” from Obama.

Price’s nomination is part of a larger clash in which Republicans want to quickly enact priorities long blocked by Obama. Democrats, with few tools as Congress’ minority, are making a show of resistance, stretching some floor debates to the maximum 30 hours Senate rules allow.

Utah Sen. Orrin Hatch accused Democrats of opposing Trump’s nominees with “apocalyptic visions of a future world gone mad.” He wondered how Democrats kept “their outrage settings turned to 11 without getting completely exhausted.”

Democrats have accused Price of lying about his acquisition of discounted shares of an Australian biotech company and benefiting from insider information. They’ve also asserted he pushed legislation to help a medical implant maker whose stock he’d purchased.

Price has said he’s done nothing wrong. It’s illegal for members of Congress to engage in insider trading.

By 53-46, the Senate ended procedural hurdles to financier Steven Mnuchin’s nomination to be Treasury secretary. Final approval for Mnuchin and for physician David Shulkin to be veterans affairs secretary was set for Monday.

Sessions, an Alabama Republican, became attorney general by 52-47 after Warren was punished for reading a 1986 letter by Coretta Scott King criticizing him. DeVos was approved as education secretary, by Vice President Mike Pence’s tie breaker in a 51-50 vote.